Halloween in our house hold is traditionally a fun, happy time, with much laughter as pumpkins are carved, the hall is decorated and the two Mudlets don their costumes and face paints, ready to receive the “trick or treaters”. 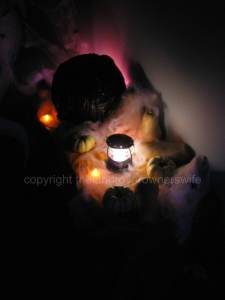 The plastic Halloween lanterns are brought down from the attic, dusted off, fitted with new batteries and then we all hold our collective breath as we wait to see if they have survived another year of storage, or if their cheaply made circuitry has finally given up the ghost (excuse the pun), after 3 Halloweens of being dropped, bumped and generally neglected by the over excited Mudlets.

Of course the carving of the pumpkins, grown by me and two of which dwarfed the ‘extra large’ ones a certain well known supermarket had for sale this year (not that I’m bragging), is, according to Mud, the highlight of the day and a task only undertaken by Mud himself.

Unfortunately, this year, Halloween coincided with the end of Muds’ week off and, as a result, he was like a bear with a sore head, as he contemplated his first day back at work on Monday. Scrooge at Christmas would have been a more cheerful companion.

It always amazes me just how much discussion is required when designing the face of a Jack-o-lantern and the infinite care which is taken in the drawing on, rubbing off and then redrawing of the various facial features. The littlest Mudlet is usually quite happy with whatever face daddy draws then carves on her pumpkin (the biggest one this year) and so pumpkin number one was done and dusted in quick time.

Her 6 year old sister, however, is a quite different prospect and is every bit the perfectionist – truly her daddys’ daughter – when it comes to pumpkin faces.

“No the eyes aren’t right” was repeated several times this year as Mud attempted to fill her rather vague order for a vampire, when asked what king of face she wanted. Her exacting demands were rapidly driving Mud to drink, as realisation dawned on him that his afternoon of stripping, cleaning, oiling and then lovingly packing away, the various components of Ciggys’ engine, was slipping by at a quite alarming rate of knots, not helped by the fact that the clocks had gone back and so he had an hour less of daylight in his unlit workshop.

Never had pumpkin carving been carried out with so little enthusiasm, even less patience and without even a hint of a smile.

Mud grumbles that the oval shape of Middle Mudlets pumpkin made for a difficult carving session and the lack of a flat base added to his woes but she insisted and he persevered but, in the end, it was the Mudlet herself who drew the eyes. By the end of that design session, Mud was a fully paid up member of the ‘Society for the Prevention of Cruelty to Forensic Portrait Artists’ and felt their pain and frustration, on a deep and personal level – his arm ached and he hadn’t even started to carve the thing yet.

Two hours after he had started, I had a mountain of pumpkin to use and three painstakingly carved pumpkins were ready for 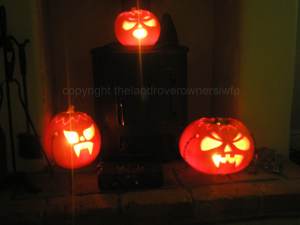 display, two on the hanging basket hooks near the front door and one in the ‘witches coven’ hallway. By this time however, the light was fading rapidly and so Mud decided that a trip to virtual Landy world was in order.

Unfortunately for Mud, there was one more insurmountable snag ……….

……. you see, in an attempt to minimise the number of gadgets in our cosy little lounge (cottages aren’t known for their generous room sizes), Mud had decided to feed the computer through the TV, thereby bypassing the need for a computer screen.

On the whole this arrangement works well but on this particular day, at that particular moment, the Mudlets were half way through watching a film on the TV. After announcing his intention to turn the film off and the computer on, Mud found himself faced with one upset little witch, an angry little bat, not to mention a thoroughly annoyed Mrs Mud, and so, deciding that discretion was the better part of valour, he retired back to his workshop and used what little light there was to pack some more bits away.

What amuses me most about Halloween, is the way the Mudlets get all excited about the trick or treaters, most of which are their friends from the village school. They spend hours asking, time and time again, when the first ones will arrive. Then every knock at the door sends them scuttling to grab and switch on their lanterns, before we open the door and they give out the treats.

About and hour in. though, anxiety starts to set in about the number of callers:

Next year, Mud reckons we’re going to rope the Student  Mudlet in to take the little Mudlets trick or treating – it’s time, he says to recoup at lest some of the cost of the treats we’ve given out over the last 7 years or so.