“I will have parsnips with Christmas dinner”, is  a phrase that will probably stay with me until the very end, along with the corresponding image of Mud attacking my parsnip bed with a wood axe, last Christmas, in an attempt to free the last of the parsnips. from the frozen ground He’d already managed to hack a few leeks out but Christmas dinner without honeyed parsnips was not an option. 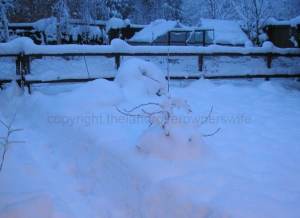 On Muds’ express wish I had grown loads of leeks last year. The parsnip numbers, however, for some reason were a little low and those that had grown weren’t exactly over-sized (unlike 2009 where one root alone was the girth of a milk bottle and weighed in at 1lb 8 oz) but they were respectable and Mud was determined to ‘harvest’ some.

I did feel a bit sorry for him though because he’s waited patiently for the leeks and parsnips to be ready and then the snow had arrived and the vegetable plot had been buried under 2 foot of the white stuff for a couple of weeks. Then to add insult to injury, once the snow had finally  melted, the temperature had plummeted to well below freezing and had stayed there up until Christmas which effectively meant that we hadn’t been able to dig much of anything up.

This weather also meant that most of the remaining leeks had turned to mush but the parsnips, on the other hand, would be beautifully sweet due to the way in which freezing conditions turn the starch in parsnips into sugar. That’s if Mud ever succeeded in freeing one.

And that’s the thing with growing your own. You can do everything right. Prepare and fertilise the soil in Autumn (or not in the case of parsnips – they don’t like newly fertilised ground). Put netting over vulnerable crops (pretty much everything in my experience). Thin our, weed, water and feed. Spend hours tending and checking, removing dead or decaying leaves, everything to help your crops grow and then Ma Nature steps in and everything changes.

Varieties which did so well the previous year, when, for example, there was a pretty equal quantity of rain and sunshine and the frosts finished relatively early, may well have struggled or failed completely this season because a very late frost hit young plants (even under cover) so hard that they either perished and needed to be replaced, delaying the whole growing process, or took many days to recover and, as a result, the end product was stunted or the mature plant not as prolific.

Add to this a hot dry spell just when the first runner bean flowers are ready to start setting pods, causing these first flowers to fail, thereby putting paid to the bumper crops of the previous season, or the problem of too much rain, spelling disaster for outside tomatoes, in the form of blight. Finally, throw pigeons, caterpillars and aphids into the mix and, arrrghhh, it’s a nightmare.

All you can do is keep on trying. Learn from the failures and take steps to protect where necessary. All our root vegetables are grown in 2 foot high raised beds, under netting, to deter and confuse the root fly and sown with spring onions to try and camouflage the smell and this seems to work – most of the time. The 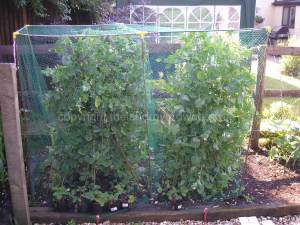 Mangetout is grown under netting to thwart sparrows and I also grow sweet peas nearby tp give them another focus for their foraging.

I’ve given up on cauliflowers, sprouts and broccoli as main crops due to the amount of space they take up and the level of care they need to protect them from cabbage whites and the pigeons, The time I’ve saved not having to squish butterfly eggs and pick of caterpillars (yes, even under netting they seem to find a way) only to discover at a later date that I’ve missed some and they’ve eaten their way through the plant anyway, that time and space is now used to grow less vulnerable crops.

All lessons learned the hard way.

Mind you, the sense of satisfaction that you get when you serve up Christmas dinner and it’s your King Edward potatoes, your Leeks, carrots, runner and french beans (the latter 2 harvested, blanched and then frozen during the summer) and your parsnips, honeyed and roasted (yes Mud did get them out, albeit frozen solid and bearing the marks of frenzied hacking), that feeling is priceless and worth all the heartache, hard work and worry ……. and then it starts all over again the following spring!