It always seems to Mud that whenever he decides to start a large job which necessitates the getting out of numerous and often cumbersome tools, previously brilliantly sunny weather begins to change to torrential downpours accompanied by gale force winds.

Having booked a week off with the intention of getting all of Ciggys’ body panels and, most importantly, her bulkhead stripped down, primered, under coated and then top coated he was more than a little frustrated to find his efforts hampered by the inclement and unseasonably cold weather. To say that things have been a little tense would be an understatement.

It became apparent early on in the week that the steel bulkhead was unlikely to get done as it would need to be stripped back to bare metal first and with such high humidity and the periodic but frequent rain showers, it would not be possible to get the important primer coat on as it simply wouldn’t dry and to leave the bulkhead stripped to bare metal was asking for trouble. So he quickly painted a protective layer of primer over the recently repaired foot wells and put the bulkhead back onto the chassis for safe keeping.

As applying the top coat in the workshop was not a viable option due largely to the need of ventilation but also due to the rather cramped and cluttered space, we came up with the happy notion of erecting the gazebo and using that as a paint booth. This would give both the ventilation required but together with copious amounts of plastic sheeting for quickly covering newly painted panels, it would also keep the weather at bay to a degree, although it wasn’t actually waterproof.

By then end of the week, the only part other than the bulk head left to paint was the tub. This had already undergone what can only be described as a pretty amazing transformation but it still needed its’ top coat of ‘Cockpit Green’.

Unfortunately the temperature had dropped even further and the rain kept falling which meant that, realistically, spraying the top coat was not going to work. But Mud had a go anyway …… and it looked awful. So he gave it another coat and it didn’t improve the look at all. Finally, conceding defeat and bemoaning the wasting of the ‘Cockpit Green’ paint, he had to wait for a break in the weather before he was able to sand the tub back and re-apply the top coat.

And so with all the panels sprayed and loosely bolted back together, Mud was a happy bunny and Ciggy looked like this ……. 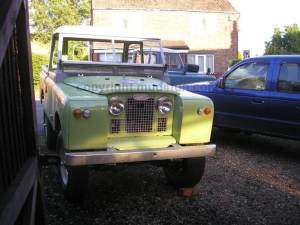