Even at my age, I find building with Lego really therapeutic, relaxing and down right satisfying . Rummaging around in a box or three of bricks, creating something out of nothing and then sitting back and surveying my efforts with a relaxed sense of satisfaction. 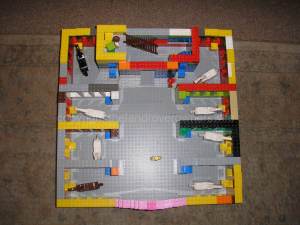 It’s not often that I get the chance to indulge my thwarted architect side but last night I designed and built what I thought was a pretty impressive, eight stall stable block for my youngest daughter, complete with water buckets, hay in mangers, hay loft and tack room! Of course ultimately, it would be Little Mudlet who would decide on how successful my build was and I would have to wait until morning to get her considered opinion on things.

The thing about children is that they tell you how it is. At age six, they haven’t yet learned the art of prevarication and tact and simply say what they think – the very first thing that comes into their heads, with little or no regard for the effect their words might have. So it was with some trepidation that I waited for her reaction to the sight of pretty much all her Lego, having been built into one model on her base board.

She has played with them all day, using the road base plates to create a ‘lane’ around the main building leading to a field (green base board). The biggest accolade of all, however, came when her older sister decided to demolish the police station model she had spent hours the previous day building and to replace it with a replica of my stable block! Wow!

Not that I got much chance to bask in my glory as Mud and I had some essential pre-MOT work to do to Annie in readiness for her MOT on Wednesday. We had intended to do the work yesterday but with temperatures close to minus figures, the absence of a heated workshop and promises from the weather forecasters that today would be warmer than yesterday, Mud decided that we would postpone the work until today.

Unfortunately, the promised heatwave (well anything over 4 degrees is considered a heatwave over here at the moment) didn’t materialise and so it was with a great deal of reluctance that Mud and I traipsed outside to do the necessary work, hoping and praying that the issues we needed to solve would be easily remedied without the need to expend great sums of money.

Another thing I have learned in recent months is that nothing is ever easy or straightforward when dealing with old Land Rovers, every bolt is an original factory fit and, as such, is bound to be seized solid with 25 years of accumulated dirt, grime and rust, taking a minimum of 2 hours to ‘coax’ into releasing its’ grip and no two nuts or bolts are ever the same size, even if attached to the same part, and so every socket and spanner owned will need to be on hand for the duration of the job.

First job of the day: remove steering box cover and tighten adjusting nut to take up slack on the steering. Surprisingly enough the two bolts holding the steering box cover on were a doddle to remove (although re-tightening the one in the engine bay was a little more difficult later on due to the complete lack of space for fingers or tools). However, it soon became apparent that the adjusting nut itself had not seen the light of day since it was first attached to the car in the factory. Hot soapy water and a wire brush soon took care of most of the rust and grime but Mud needed the help of the lump hammer, applied to the spanner, to persuade the nut to loosen. A small adjustment later and the steering issue was sorted.

Second job of the day: To adjust the tappets and to remove the caps Mud had put over the valve ends, during the head re-build last summer. The original rockers pads had large grooves worn in them and Mud discovered that the later 2.25 diesel engines, like Annies’, had been fitted with caps, presumably to protect the rocker pads. Unfortunately, since fitting these caps a really annoying tapping sound could be heard coming from the engine under load and so Mud decided to remove them whilst we had the cover of. An hour later that was another job completed. Caps off and valve distances checked and adjusted as per the Haynes manual.

So an hour and a half in and two jobs done – that had to be a new record for Annie. After helping Mud reattached the bonnet (did I mention that we had to take the extremely heavy spare tyre off the bonnet and then the bonnet itself off to do the tappets?), I came back inside to try and get some feeling back into my numbed feet and hands, whilst Mud took Annie out for a test drive.

All appears to be well and we now have to hope and pray that she passes the MOT on Wednesday without further work needing to be done. Mud has decreed that we will pay for another MOT in the Summer so that never again will we have to do work for the MOT in such freezing conditions. I chose not to remind him about how cold and dismal last summer was ……. somehow I don’t think he would have appreciated it :).

Photo reproduced with the kind permission of mud4fun.com