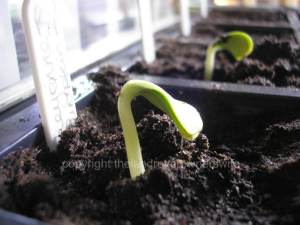 At 3 weeks, these seedlings are starting to put on some growth now but it will be several weeks before I will risk planting them out, due to the chance of late frosts: 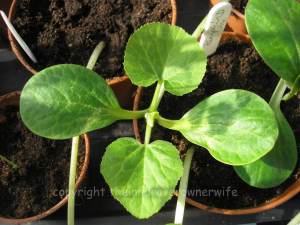 At 7 weeks old, these two pumpkins are now in the ground with their empty pots beside them for easy and direct watering and feeding.

At 2 months old, the first flowers are appearing on the plant, although there is not much in the way of foliage as yet. This flower has a long, straight stem and is a male. Female flowers have small, embryonic pumpkins behind them. It is not unusual for squash plants to initially produce loads of flowers of one sex – it may seem like an endless wait but the other gender does appear eventually.

A male flower is forming

3 months old and I’ve spotted the first of the female flowers. 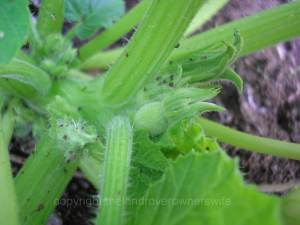 Another 10 days on and the flower has opened and shut again –  now it’s  case of wait and see if pollination was successful. As with all my squash varieties, I used a fine paint brush to help with the transfer of pollen from a nearby male flower to this one (details and photo’s on the Anna Swartz Hubbard post) but there were plenty of bees about.

The female flowers on these plants are quite unlike any other pumpkin or squash variety I’ve grown, with an almost star shape to them in the way the flower opens. They are quite striking though. At first I thought it was a malformation of a flower on one plant but as all the female flowers from this variety are the same, I guess this is normal. 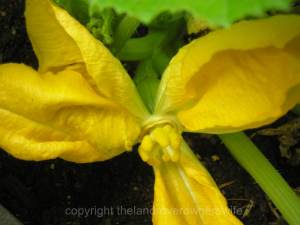 Once successfully pollinated, pumpkins and squash grow very quickly. Mind you, sometimes a fruit will start to swell and grow only to stop for no apparent reason when they reach the size of an orange or grapefruit. I have documented the growth of individual squash or pumpkins on a separate post which can be found by clicking here. 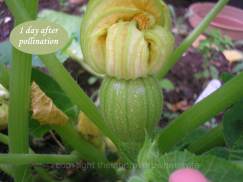 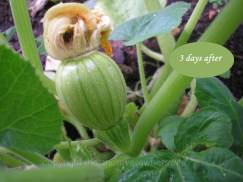 I won’t be updating this post now until it is time to harvest pumpkins which should be in October but before the first frosts, so I will be watching the weather forecasts avidly from mid September.