Just one of the ways to enjoy a bumper crop

I believe that most home growers would agree that once you have eaten your own home grown fruit and/or vegetables, then going back to shop bought produce, once your carefully nurtured crops are finally finished, is like a form of torture which would surely be forbidden under the terms of the Geneva Convention.

Of all the crops that we grow, there are 4 or 5 to which this absolutely applies and these are carrots, parsnips, leeks, sweet corn and strawberries. Of them all the humble home grown strawberry is by far and away, top of the tree, when it comes to the difference between home grown and shop bought.

Over the last few years, I have carefully cultivated our strawberry plants, trimming dead leaves, and catching up the strawberry runners, popping them into small plant pots and letting them over-winter in the greenhouses. The older plants are generally left to fend for themselves over Winter and when Spring arrives, it brings with it another round of dead leaf removal, followed by potting up into fresh compost and, on the whole, the older plants come back with renewed vigour. Those that don’t are quite ruthlessly composted.

We have three varieties of strawberry in the garden but I can’t for the life of me remember what they are. The first variety came from the garden centre, in hanging baskets about 7 years ago. Then the following year I grew some from seed and the descendants from these plants are easily identifiable because they have smaller leaves than the others. The final variety came from a plant sale and were actually descendants of plants which have been grown in the kitchen garden at Normandy Hall since Victorian times and it is the descendants of these plants which give the best crop of strawberries twice a year, at the start of the summer and then again at the end of the summer. 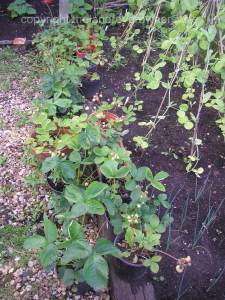 The Victorian plants have the largest of the leaves and are certainly the most prolific both in terms of the numbers of sizable strawberries and the number of runners they produce each year, in fact we kept these plants next to the flower border opposite the back door, for the first year we had them and they set some runners into the gravel and the bed itself. Now some 5 years later, the coverage of strawberry plants in the bed is unbelievable and these plants produce the largest strawberries of all, not that we ever get them, as Mud insists we leave these for the wildlife …… maybe not this year though, as there are rather a lot of them on the plants.

Yes, this year we are definitely experiencing a bumper crop of strawberries, much to the delight of the Mudlets who have been able to enjoy several breakfasts of Weetabix with fresh strawberries, or a snack of sliced strawberries on their return from school and even Mud and I have had more than our normal share of the bounty.

There quite a few strawberries in the flower bed

As I mentioned in another post, picking the berries is an art in itself, as I try to get the balance right between them being just about ripe enough to finish off in the house but not for the wildlife to fancy them yet, and being absolutely perfect but the birds/mice/voles beating me to them. It’s a juggling act and so far this year I think I’m winning, as only 3 or 4 berries have been nibbled by a non-human garden visitor.

Over the last couple of days, I’ve been keeping the strawberries rather than letting the Mudlets eat them, ready for making into the Sunday dessert. I did fancy making a meringue based pudding but with the Rayburn switched off for the summer and all cooking being carried out on the BBQ, making my own was not a possibility. So I trundled off to town with sole intention of laying my hands on some meringue nests or some such thing. In the end I settled on a ready made, 10 inch flan base because this brought back memories of a favourite childhood Sunday pudding – fruit flan with ‘Dream Topping‘.

Middle Mudlet has her eye on this one …. it’s huge.

‘Dream Topping‘, for those of you who don’t know, is a …. well it’s a sweetened, pretend cream topping really which you make by blending a sachet of the powdered pretend cream with milk. I’ve never had it as an adult because I suspect that the grown up me will not appreciate it anywhere near as much as the 10 year old me did – and anyway, I can make my own sweetened cream now by mixing double cream with icing sugar and vanilla. Some childhood experiences should be left well alone, especially if you grew up in the 70’s and 80’s and I quickly decided that ‘Dream Topping‘ was one of those. I settled for some creme fraiche instead, to lighten the dessert but I did mix a touch of icing sugar and a few drops of vanilla essence in with it and it worked remarkably well against the sweetness of the flan.

The other essential part of my childhood pudding which I was delighted to find and which I did buy, was ‘Quick Jel’. As the name suggests, this is a quick way to make the light jelly for the top of the flan, requiring little more effort than bringing to the boil with a spoonful of sugar and some water before pouring over the fruit filled flan case (you can see why this particular pudding isn’t in the ‘Home Baking’ section of my blog :)). 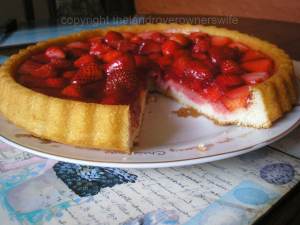 A blast from the past – strawberry flan.

A quick rummage around the strawberry plants for any newly ripened specimens to add to the topping and I was all set. Middle Mudlet, who helped look for more strawberries, spotted a huge berry and was massively disappointed to find that although the top was turning a nice red, the underside was still white and, as such, was too far off ripe to be considered.

I have to say that, even with a shop bought flan base, the dessert was a success, crammed to the rafters (well to the rim) with slices of fresh, homegrown strawberries, sitting in the sweet light jelly and served with a generous dollop of creme fraiche, it was Summer on a plate …… now if we could just have Summer outside as well, we’d be sorted.