By far one of the best ‘free hand’ models that Mud has ever made from Lego, has to be his representation of a classic Series 2 Land Rover, using green bricks and subsequently adding a white hard top. Personally I feel the end result was pretty good, although it took some time to make as, without a set of instructions to work from, he had to work out what he needed and then try and find appropriate bricks amongst the thousands contained within the Lego boxes.

Eventually, his perseverance paid off and we ended up with this cute little mini ‘Ciggy’, complete with fold down windscreen, bonnet mounted wheel (sadly not the delux bonnet though) and a tow hook on the back.

Mud being Mud wasn’t satisfied with just the Landy and very soon we had a Sankey trailer to go with it, oh and the spare tyre had disappeared from the bonnet by this point.

Now as all those of us who own one are aware, one of the key advantages to taking on an old Landy is its’ ability to morph into a completely different vehicle with minimum effort, in a matter of hours. Annie, for example, drove down to Daventry last year wearing a Truck Cab and when Mud left there a mere 2 hours or so later, she was proudly sporting a hardtop, carrying the truck cab in her pick up bed – couldn’t do that with a modern, so called, ‘eco’ car. 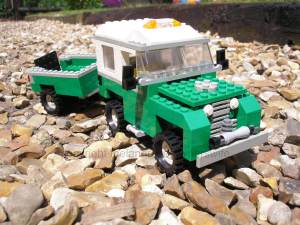 So in the true spirit of Land Rover ownership, Mud built a white hard top with windows for his mini Ciggy, removed the front indicators (who needs them anyway?) and fitted a winch.

Finally we ended up with a Series 2 SWB in ‘Bronze’ Green (well it was the closest shade of Lego bricks we had to the colour – which isn’t that close at all, if I’m honest) with a white hard top and a thoroughly happy Mud. 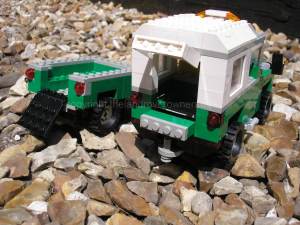 When I originally did this post in March of this year, I chose to write about the little green Lego Series 2 that Mud had built. He had also built a red 109″ Series 2 (should have been built with blue bricks, if you ask me) but he wasn’t overly happy with the finished look and so I didn’t include it.

However, he has found a picture of the two Lego Land Rovers together in which the red one looks acceptable (if you ignore the colour that is) and so here we have it (drum roll please) designed and built by Mud4fun.com, a pair of Series 2 Lego Land Rovers: