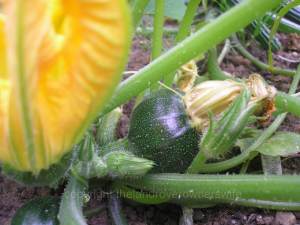 A round courgette – an interesting addition to the lunch time vegetables

The next couple of weeks promises to be a very busy time at the school patch, as the children and I sort, sweep, weed and tidy the Polytunnel and growing areas ready for the Schools Summer Fair and Community Day, generally preparing to show the Gardening Clubs hard work and the vegetable patch itself, off at its’ very best.

I had given the children a break from gardening last week, knowing that a very busy time lay ahead of them, I didn’t want to scare any of them off and there were also a load of jobs that I needed to get on top of before the big tidy up, not that there is much to do really, as we have a ‘Plant something, weed something’ rule which the children are happy to abide by. The theory is that if we do some weeding every time we plant something, then we won’t need as many full scale weeding sessions which will help maintain the interest of the children.

With a list of what needed doing firmly implanted in my head (I just haven’t had the time to write it down yet) and a plan to ask for help from parents as well, I set off for the school garden yesterday, late morning. My first job of the day had nothing at all to do with the great tidy up  and everything to do with providing the school kitchen with fresh produce. By the time the school dinners arrived from the off-site kitchen in whcih they are prepared, I had cut two large lettuces and a handful of salad leaves, picked 3 courgettes (2 round ones and 1 normal) and 8 round carrots which I had thinned from the bed.

There was also a mixed bag of baby broad beans, gleaned from the 8 or so pods produced and peas which were actually picked from the Feltham First peas, we had sown for pea shoots but which had subsequently flowered and produced a respectable number of fat pods.

This strawberry had been nibbled but plenty more hadn’t.

With those items on the way to the kitchen, I turned my attention to the strawberry plants and another 15 berries were picked and handed over to the on-site cook, for washing and preparing ready for the school lunch. I have it on good authority that the strawberries supplied to date have been a hit with the children – now there’s a surprise, not!

For anybody involved with a school garden, lacking any or large enough quantities of strawberry plants to produce some for the children, don’t be afraid to ask for some donations. Last year we put out a general appeal to parents and the wider community, for surplus strawberry runners and were astonished to receive between 80 and 90 plants. In fact as we are a small school we actually had to start refusing offers of more runners, as we simply didn’t have the space for any more.

Getting ideas above my station

I passed the remaining time before gardening club potting on more seedling salads, kale and spinach before heading to the playground to round up my first band of gardeners. Last week I had been asked to step in to help with the cycling proficiency lesson for the year 5 children, after an emergency had prevented the usual helper (another mum at the school) from being there. I’ve helped with the cycling proficiency before and it isn’t exactly an arduous task and so I was happy to step in. Yesterday, as I waited for my gardeners to assemble, the other mum, who is also a temporary dinner lady, gave me a gift by way of a thank you and I chuckled when I realised what she had found.

“I saw this and thought it was perfect,” she said laughing. 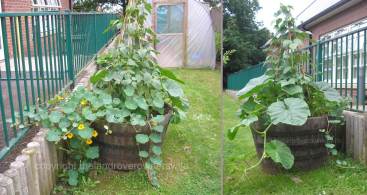 Both sides of one of the tubs.

Before going to get the older children for the first gardening session of the day, I had put all the plant pots onto the grass in front of the Polytunnel and their task was to sort them into neat and tidy piles of same sized pots. I had expected a few groans but all seven children, happily donned the new aprons and set about sorting and stacking in an orderly way, helping each other, putting cracked or broken pots to one side and, by the end of the 20 minute session, they had sorted the lot!

With all the pots sorted in unexpectedly quick time, the next task which would be carried out by the younger children, was to weed a couple of the raised beds. As with the first group, the children were enthusiastic, happily putting on their gardening gloves and the new aprons and using the kneelers. Again, I was impressed by their attitude and they managed to weed both beds, as well as clearing the Broad bean plants from one of them.

Lunchtime over and the children back in class, I quickly watered the plants in the polytunnel and then headed for home, happy with the way things had gone and relieved to cross a couple of jobs off my list. Maybe we will be ready for the Summer Fair after all.