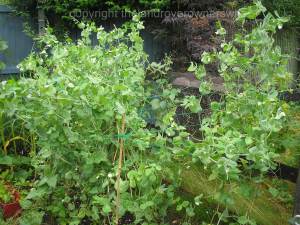 Each year about this time, I sow some carrot seeds in a tub, in the greenhouse. Actually this year I’m a few weeks earlier than normal because experience has taught me that the longer I can have them growing before the first frost the better the result (which isn’t that much of a surprise when I think about it). The aim is to have fresh, homegrown carrots, alongside freshly pulled parsnip, leeks, stored and cured winter squash and blanched and frozen Runner and Climbing beans with Christmas Dinner. If I have some potatoes left for roasties then that will be an added bonus.

Carrots for Christmas – I hope!

Sowing direct into the ground this late on in the year, if your current crop has failed/been attacked, is not really an option due to the frosts from October onwards and so tub grown carrots can be a real lifesaver. Also if your stored carrots have been compromised somehow, then having a tub of carrots happily growing away in the greenhouse can alleviate some of the disappointment and I see them as my safety net, not that growing them in tubs is foolproof – the damp conditions of last year did absolutely nothing for the success of the tub carrots but then I did sow them a little later than normal, hence the decision to sow them now, while they have the chance of warm weather to get them established before the colder, damper weather arrives. 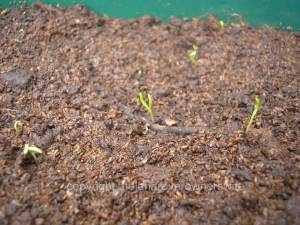 This time I’ve sown a mix of Parmex and Early Nantes in the tub.

Using a tip from another gardener, I sprinkled the seeds one variety at a time, mixed in with some sugar. This would, I was told, help the seeds to maintain a decent gap between each other, thereby reducing the need to thin which would as a result, reduce the risk of carrot root fly. I’ll give anything a try and judging by the spacing of the emerging seedlings, I would say, at the moment that the sugar has indeed helped with the spacings to a degree, although some of them are still rather close together but not in the ‘3 or 4 from exactly the same place’ way, that often happens with carrots.

Mind you, this could merely be that only one lot of seeds has emerged so far and when the second lot kicks in, then crowding could occur but time will tell. Talking of emerging seedlings, I’m a little surprised to see that it has only taken 5 days for the first of the seedlings to emerge and on my traditional morning walk about the garden today (8 days after sowing), I notice that there are already an impressive number of little green heads above the compost.

8 days after sowing the seeds

I’ll include updates on the growth of the tub carrots and their ultimate success or failure in my usual garden update posts but this one was to explain my reasons behind sowing now. It really is worth taking the chance if you have the space and could help prolong your carrot crop and help extend your stored carrot stocks.

My difficulty will be in keeping the Mudlets from eating them all before Christmas but then i do have a bed of regular carrots for them to munch on ……. and the tomatoes and cucumbers will hopefully be ready for eating soon …… and then there is the mangetout …..

2 thoughts on “Carrots for Christmas”