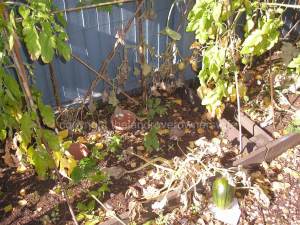 Most of the beds are still occupied but some plants like the pumpkin vine shown in this picture, have now been composted

As I opened the front door to collect the Mudlets from school,  one afternoon last week, I almost fell into the bag of well rotted horse/cow manure that a horse owning friend had kindly deposited on the drive.

“I left you a present,” she told me a few minutes later as I walked onto the playground, “Did you see it?”

You can’t really beat well rotted manure for restoring and enhancing tired ground and by the end of last week a further two bags had been delivered.  Manure can ‘burn’ plants and needs time to break down and ‘soften’. So normally at this time of year, the contents of these bags would have immediately been tipped onto the beds, to be dug in and to give the worms plenty of chance to do their work before the bed was once again planted up.

A covering of manure – you can’t get better than this!

This year, however, only two of the beds are actually empty, due to the continued good weather, relatively speaking, and warm temperatures and of these one of them is to be my Winter planting bed and so I can’t actually put the manure on it. I will be top dressing it with chicken manure pellets but raw manure, no matter how well rotted, is not an option at the moment.

The other empty bed has had a bag of the manure spread over the top of it but this year I am adopting a no dig approach, thereby minimising potential disruption to the ecosystem already established in the beds and basically just letting the worms do their thing. In the mean time the remaining bags have been stored at the bottom of the garden and will be applied to the beds as and when they are fully cleared. 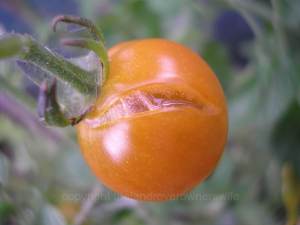 A casualty of too much rain

I have been busy though, removing those plants which have come to the end of their growing life and these are now entering the next stage of usefulness, that is to say that they are in the compost bins and will, in due course, provide the nutrition for future plantings.

I am still a little surprised by the fact that the tomatoes are still ripening on the vines outside with no sign, yet, of blight. Mind you the wind and rain arrived with a vengeance last Thursday and today (Tuesday) is the first real day of dry, still weather we’ve had since, so I will be keeping an eye on how things are doing. I have lost a few tomatoes to splitting which, for those of you unfamiliar with the joys of tomato growing, happens when the plant takes on too much water at one time – during heavy and persistent rainfall for example. The tomatoes then swell too quickly and the skins split.

One of several clumps of beans still growing

As for the beans, well both the ‘Cherokee Trail of Tears’ Pole Beans and the ‘Czar’ Runner Beans appear oblivious to the fact that they really should have finished flowering by now and we have dozens of runner bean pods still growing on the plants in the raised beds. As part of my seed saving endeavours, the bean plants in the half barrels have bean left to wither and the remaining pods to dry out, so that we can harvest the beans inside for next years sowing.

In the large greenhouse, the various chilli are happily ripening on the plants and the strawberry runners are all doing nicely. I finally got around to cutting the strawberry runners from the flower bed plants which I had potted up when I did those in the vegetable patch. These have now joined the others in the greenhouse and a final head count has revealed that we have a total of 83 strawberry plants for next year. I have my fingers crossed for another year like this one, resulting in more flans and jam which should help keep the Mudlets happy.

I still have a lot of preparation work to do to ready the garden for Winter, including the setting up of the two new growhouses/cloches/mini polytunnel like structures which Mud bought for me and lining the small greenhouse with bubble wrap to help insulate it and, hopefully, keep on growing in there too but more on those two projects later.

Of course my winter growing hasn’t just been confined to the garden or greenhouses and in the cottage, on the dining room windowsill, the Little Elf chilli seedlings are doing very well with the two oldest plants now standing at about 1.5 inches or 4cm (400mm for you engineer types out there who, according to Mud, don’t do centimeters).

Sarah the Gardener, who lives in New Zealand and is therefore currently enjoying the start of spring, suggested we compare how her chillis and mine do over the next few months, just out of curiosity really. As my Little Elf seeds and her chilli seeds were planted around the same time, we thought It would be interesting to see how her plants with warmer ambient natural temperatures and longer daylight hours do compared to mine which are growing in an artificial environment and temperature and have shorter daylight hours. Of course there is nothing scientific about this as we haven’t used the same compost etc etc but watch this space … it could be interesting.

8 thoughts on “Feeding, clearing and weeding: preparing the beds for winter (part 1)”