With the grow houses planted up, I turned my attention to the rest of the garden, rolled up my sleeves (figuratively speaking – it wasn’t that warm) and started ripping out, composting and dismantling.

Tomato plants, weeds and sweetcorn all went into the Councils brown compost bin (both mine are full to bursting), along with what was left of the sunflowers. Bamboo canes were pulled out and garden wire was untangled, rewound and put away ready for use next season – that last bit sounds easy but it wasn’t! The last of the beetroots which hadn’t really amounted to much and had become very woody also joined the Brown bin collection, as did half a dozen tiny Kohl Rabi and the last of the lettuces which had well and truly gone to seed.

The tomato plants were looking a little worse for wear.

The sweetcorn and sunflowers followed the tomatoes into the brown bin

Finally I was left with the one job I truly hate when it comes to emptying the garden. I had planted, pulled, tidied and prevaricated for as long as I could but there was no getting away from it …. the beans had to come out!!!

We love beans and we love to see them in all their glory during the summer, with oodles of lush foliage, dozens of flowers and then the clumps of beans, hanging down, waiting to be picked. It really is quite clever how the vines learn how to grow up and along canes, wire, anything you can supply for support really.

But when the flowers have finished and the first frosts have come, then you know that you now have miles and miles of twisted vines to unravel from your Wigwams. Oh and it isn’t just one vine per bit of wire! Oh no! That would be too easy. Often two or three vines and not necessarily from the same plant have twisted and grown along your wires and up your canes, making it nigh on impossible to simply unpin them from their supports and pull them out!!!! 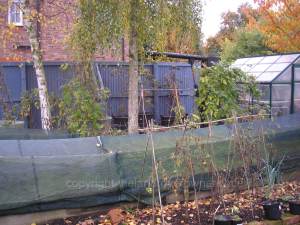 The garden in need of a tidy up

One hour and much tugging and unwinding later, the wigwam in the raised bed was finally empty of plants, disassembled and put back into storage. There were still the wigwams in the half barrels to sort out but by now I had almost lost the will to live and decided to leave them for another day, opting instead to remove yet more tomato plants and their supports from the beds along the back fence.

I did need to be quite careful as I was dismantling the bean pyramids, as there were many different species of ladybird, all looking for a nice place to hibernate. I relocated as many as I could to my greenhouses, in the hope that they would like their new homes so much they would stay on indefinitely and repay me for their winter board by producing dozens and dozens of ravenous off spring next season.

I decided to leave the half barrels for another day

My final job for the day was to distribute the two bags of well rotted horse/cow manure supplied by my friend a few weeks ago and these went onto the fence beds and one of the half sized raised beds. I haven’t dug the manure in because this year I have opted to allow the worms to do all the hard work for me, thereby protecting the fragile ecosystem that exists within my beds  and saving me hours of back breaking work.

Satisfied that I had made significant inroads into my ‘To Do’ list, I packed my tools away but I still have some essential autumn jobs that need doing, including:

And once I’ve finished in my garden, then of course I have the school garden which is also in need of some attention …..

3 thoughts on “Wigwams, beans and manure”