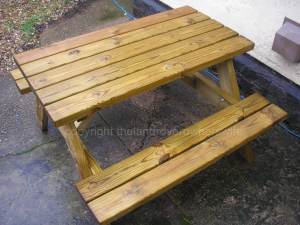 Doesn’t look much like Land Rover parts to me!

When Mud and Little Mudlet came back from a run out to our local Land Rover parts supplier, I was somewhat surprised to hear tales of child sized wooden picnic tables and benches, gush forth from our excitable 7 year old, rather than the usual detailed description of Land Rovers she had spotted.

Confused, I turned to Mud for clarification:

“We called in at the timber merchants on the way home to get some Supertherm for the wood burner,” he said, “And they had this cute little table and bench set for £30.”

Oh! Really! They did did they? I commented that we really didn’t need a table and bench right now, as we were fast approaching winter and Mud himself was always complaining that summer only ever lasted 6 hours in any given year, if we were lucky.

No more was said but when Mud and Middle Mudlet returned from another shopping trip a mere week later, I wasn’t at all surprised to find the aforementioned table and bench set, in Annies load bed. It is a nice little set though and the Mudelts have enjoyed sitting outside playing with their Star Wars toys (Middle Mudlet) and toy animals (Little Mudlet) on the very occasional dry and warmish day we’ve had.

“Thomas has broken down,” he said,”His radiator is knackered. You need to call the bank!”

Well yes, that is a pretty unusual request but Mud is blessed with a bank account which, for a fee, has certain benefits and one of these is free RAC recovery and it was this that I needed to activate and time was of the essence as Mud was on one of the junctions of a busy Motorway at rush hour! Thankfully, Muds bank was incredibly helpful and was able to supply me with the RAC telephone number in a matter of seconds. The chap on the other end of the RAC number was also incredibly fast, efficient and very obviously based in a UK call center which made things a whole lot easier and he had taken down Muds’ details and had called him on his mobile within a few minutes.

To cut a long story short, Thomas arrived home at around Midnight on the back of a low-loader recovery truck which was lit up like Blackpool illuminations. A few neighbourly curtains twitched …. from the upper stories but it couldn’t be helped and I was relieved to discover an unexpectedly upbeat Mud who was just happy to be home and grateful that we didn’t have to meet the cost of the recovery.

Friday morning dawned and unable to identify where exactly the radiator was leaking from and with water gushing out faster than he could pour it in,  Mud was left with little option but to have Thomas taken on another Recovery Truck to our local garage. All we could do was sit and wait. 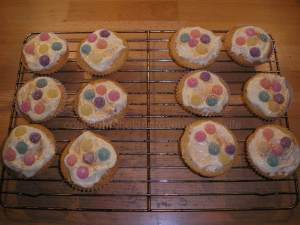 Skillfully decorated with Jelly Tots by the Mudlets

The first ‘play’ session the girls had using their new table and benches was after school last Friday (15th November) and they did look sweet, sitting outside in their onesies, with wellington boots on their feet. Last Friday had been a special day, and all the children at the Mudlets school and most of the staff, went to school in their pyjamas. Well to be correct, quite a lot of the children were in onesies but it amounts to the same thing.

For those of you not from these shores, last Friday was Children in Need day (or Pudsey Day as my girls like to call it) when virtually the whole of the UK from tiny toddlers to pensioners, do daft things to raise money for disadvantaged British children. In recent years, wearing your nightwear to school/work has become a regular theme which is why Friday morning at school was a surreal sight with children and teachers alike still dressed for bed and Little Mudlets’ teacher had even brought her Teddy Bear with her.

In addition to the non-uniform aspect, for which each child paid a pound, enough buns had been baked for each child to have one, for the cost of an additional small donation. I had agreed to bake a dozen of the buns needed and the Mudlets added jelly tot sweets to the icing to replicate Pudsey Bears’ spots. Again for those of you unfamiliar with this annual event, Pudsey is the Children in Need mascot and is a one eyed, yellow bear, who wears a spotty bandana over his missing eye.

Saturday began with the unexpected news that Thomas was fixed, ready for collection and hadn’t cost us the arm and a leg we were expecting. We really value the little local garage we use as they are so honest and will not carry out or charge you for work they don’t think is necessary. This has often caused Mud some consternation, as he has asked for a particular job to be done in addition to the scheduled service, only to find that the mechanics have looked at it, found everything to be okay and not in need of work and so left it until next time!

Anyway, the early return of Thomas meant that we could go buy me some much needed boots from another local, family run shop and we took in a lunch in the cafe of the local water bird sanctuary whilst we were in the area. I’m not a great lover of shopping of any sort but things had come to a head in terms of my dire lack of footwear. My one pair of warm ankle boots were in danger of being worn out and my old calf length boots had been worn so much that the heel of one was a full half inch shorter than that of the other. I had had the boots for several years and so it wasn’t unexpected.

So this time I was quite looking forward to trying on and getting new boots and after careful consideration I chose this pair: 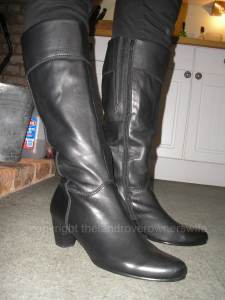 Nothing practical about these

Mud wasn’t overly impressed as he had tried to persuade me a functional, more practical boot, with a flat sole and thick tread on it, would be the best way to go with snow and ice just around the corner. However, my ankle boots are already a bit like that and so I opted for something a bit more feminine and shapely and these are really comfortable as well.

So the last week or so has been quite a busy one and with Christmas just a few weeks away now, I can’t see it slowing down any time soon and I still have the two gardens to finish.

7 thoughts on “Benches, buns, a break down and boots”