With the girls due back at school tomorrow, I needed to bake them something nice to go in their packed lunches. We also needed a pudding for tonight (Monday), as Mud had been busy cooking the roast pork dinner we were supposed to have had yesterday. Unfortunately neither of us had remembered to take the pork joint out of the freezer Saturday night and so ‘Sunday Dinner’ was happening today.

With 97 or so recipes still to be tried in my “Mary Berry 100 Cakes and Bakes” book, I thumbed my way through, pondering what to make and then I found it! The Chocolate Brownies recipe. Perfect!

Delicious hot or cold. Ideal for dessert or for a midday, packed lunch treat.

I didn’t have the 100g of plain chocolate chips required but in my baking cupboard was an 85% cocoa plain chocolate slab bought for a Christmas dessert but never used. So I took my rolling pin and battered the slab into generous sized chunks and added it to the mix.

Once again the recipe required that all the ingredients be put into the bowl together and then mixed thoroughly – with an electric mixer. Not having an electric mixer, I was a little concerned as to how easy it would be to blend the mix by hand but, as I had let the butter soften in advance, I was pleasantly surprised by just how quickly it all came together.

Too late for pudding but just right for pack ups

Just 45 minutes in the oven and we had a glorious chocolate treat complete with custard to finish our meal off with…..

Well we would have finished our meal off with it but by the time Mud had finished cooking the pork joint he had picked up before Christmas which was large enough to feed an army (it was a bargain at half price apparently), the brownie mix was quite late going into the oven and so by the time it had baked, it was far too late for the girls to have. However, the threat of tears was averted with a promise that brownie and custard would be tubbed up and in their lunch bags tomorrow. Oddly enough, the Mudlets prefer cold custard so this is how they would have had it tonight had it actually been served as dessert, so they aren’t missing out at all. 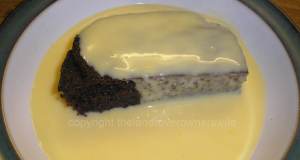 Mud and I did the taste test

Of course Mud and I were able to try the brownies with hot custard (not home made I’m afraid as I’ve yet to master the art of successful custard making) once the girls were safely tucked up in bed and I have to say that this is yet another of Mary Berrys’ recipes which tasted rather good.