A new variety of Leek to me, I can’t quite believe that I can see what appears to be a seedling after only 5 days! Of course it may well be a confused seed coming root first but only time will tell. 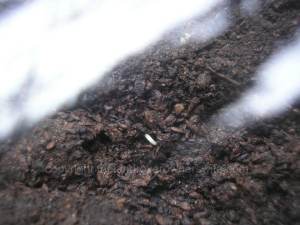 To my surprise this was actually the first leek and at three days old it had nearly unfurled completely:

By the next morning, the little seedling was almost upright and there were 5 more little leeks just starting to emerge and a couple of hours later, 2 more had put in an appearance: 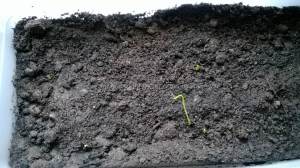 One week after the first seedling emerged and we now have 27 leeklings at various stages of emergence. In a day or so, I shall move these out of the warm kitchen and into the much cooler bathroom, as Leek seedlings prefer cooler climes. 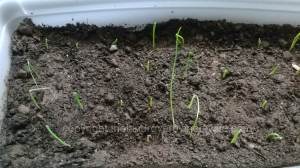 Now 11 days old and the leeklings are quite content on the cold bathroom windowsill. 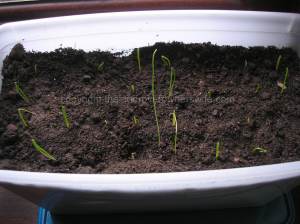 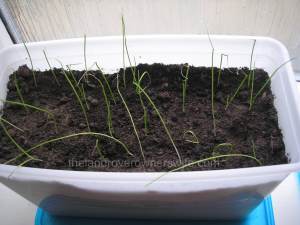 After a few weeks on the bathroom windowsill the leeks have now been moved outside into one of the growhouses where they are thriving. 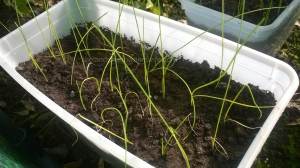 17th May: These are now living under the insect netting in one of the raised beds and are growing nicely. There is a very noticeable difference between the yellow/green of this variety and the blue/green of the other leeks I am growing. 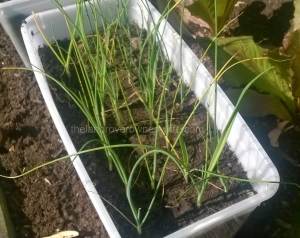 6th June: These leeks are ready to be planted out but the weather this weekend is dreadful so I’ll leave them where they are for now.

18th June: The leeks were ready for planting out and I placed them in alternate rows with the other variety Bleu de Solaise. The cardboard tubes will help blanch the stem and create a longer, tender white section of leek. 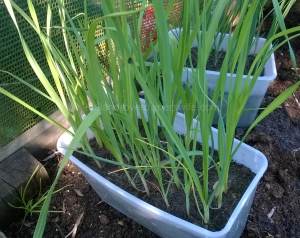