I had hoped to take a picture of Annie basking in her success (and the sun) but the rain stopped play.

As I walked backed into the kitchen last Saturday morning, the two youngest Mudlets greeted me with a level of semi interest brought on by the hope that my bag may contain more than a newly purchased box of painkillers. The need for painkillers, had been the reason given for why I had popped out but this still didn’t stop the girls from hoping that sweets or chocolate might have found their way in to my bag.

However, unbeknownst to the girls, my shopping trip had been a ruse and whilst they hovered around trying to see what, if anything, I might have got for them, Eldest Mudlet crept in from the hallway ……

Squeals of delight could be heard to the moon and back as the younger Mudlets threw themselves at their beloved older sister and the news that she was staying overnight (or, using Little Mudlets phrase, having a sleepover) was happily received.

Dense undergrowth was no barrier to a marauding Mudlet

One of the benefits of having a much older daughter is that when she offers to take her younger sisters out for a walk, thereby giving Mud and I some rare weekend peace and quiet, you can accept this offer, safe in the knowledge that the younger children have a suitable guardian with them (Mud stop laughing – she is quite sensible these days). To be offered this opportunity on both days was a double bonus and so it was that the three Mudlets wrapped up warm and headed off for a trek around the village, exploring the bridle paths and surrounding woodlands en route. 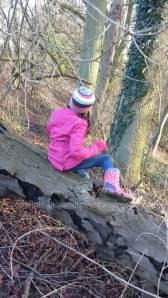 No obstacle too big for little legs

Cold, tired, a little mucky but pink cheeked and buzzing with excitement, over an hour later the trio arrived back and began a three pronged description of their adventures. Mountainous trails, unscalable rock faces and dense woodlands were all conquered by the sisters and they had the pictures to prove it.

Throughout Eldest Mudlets stay, poor Mud had been braving the elements to prepare Annie for her MOT which was booked for yesterday (Wednesday). As per normal (and as he informed us repeatedly throughout the weekend) his work was blighted by gale force winds, freezing temperatures and the odd heavy down pour but he soldiered on, determined to finish the tasks in hand regardless.

For those of you unfamiliar with the UK MOT, this is an annual road worthiness test that vehicles over the age of three, have to pass in a VOSA (Vehicle and Operator Services Agency) approved garage, the various parts of the test being undertaken by a mechanic certified to carry out MOTs. It isn’t overly expensive but it is nail biting and as Mud is invariably working on MOT day, I am the poor soul that has to take Annie and Thomas for their test.

So yesterday morning, I drove Annie down to the garage and left her to be tested.This was her third test since we bought her, the previous two each having produced nothing more than a pass with an advisory for work needing doing before the next MOT. This year, however, Mud was convinced that she would fail and so it was with some trepidation that I went back to the garage to collect her.

“It’s a pass,” the mechanic said and I was stunned but so pleased. My dear old girl had done it again. Another year of motoring and only two advisories.

There is definitely something to be said for buying British ………

6 thoughts on “Three Mudlets, a walk and Annie does it again”