Another new variety for me which will hopefully produce a decent crop of sweet cucumbers.

27th March: At 1 week old the seedlings are doing well and have now been potted on and moved into the large greenhouse, under a double layer of fleece.

30th March: The seedlings seem quite happy in the greenhouse and have grown a couple more centimetres in length and the first of the true leaves is now starting to grow.

4th April: These aren’t growing at the same speed as the squash and pumpkins but you can see from the first true leaf that there has been significant growth. 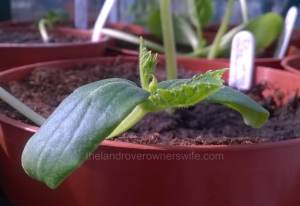 23rd April: I think I need to change the compost these seedlings are in because they aren’t growing very quickly and they are in the same compost the ailing tomatoes were in. Since repotting into All Purpose Compost, the tomatoes have improved in leaps and bounds and this may well be the case if I repot the cucumbers.

11th May: Repotting these into fresh compost has really helped and they have achieved significant growth in the last 2.5 weeks or so.

1st June: Two of the seedlings have been planted into one of the vegetable beds and the other two are in a growbag in the small greenhouse.  As you would expect and as can be seen by the following pictures, the outside plants are growing at a much slower pace than those inside. 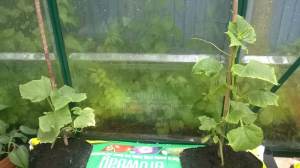 6th June: The first of the flowers are forming on the greenhouse plants

14th June: We may have the first cucumbers starting to grow – time will tell.

1st August: It’s been a frustrating few weeks with the cucumbers, as I watched each and every male flower on both indoor plants, fail to reach full size and open. Instead they would shrivel up and die off. Meanwhile the plants in the school poly tunnel which were from the same packet, were flourishing with a healthy population of both male and female flowers. I searched Google for suggested causes and, for the most part, found absolutely nothing to help me but there was a vague reference to cucumber plants not like high humidity. We’d been having very humid weather for several weeks and so I took to leaving the greenhouse door and window open at night and within a few days, the first male flowers actually opened. Now perhaps we may get some cucumbers.

9th August: We have a cucumber growing!!! Finally. Hopefully the first of many. 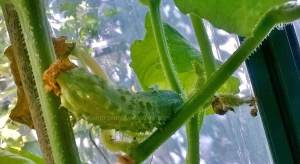