I’ve grown this variety for several years, with plants producing gluts of fruit but last year was a complete disaster. Fingers crossed for a better year this year. These seeds were sown in three inch pots to start with.

7th April: A lot of growth has been achieved in just a couple of days and these are now ready to be potted on and will join the squash, pumpkin and cucumber seedlings in the greenhouse and will also be sharing the fleece blanket at night.

13th April: At 8 days old, the seedlings are growing well in the greenhouse. They are still under fleece at night as there is still a risk of frost. 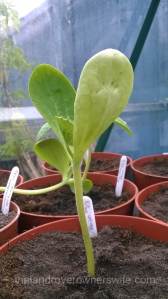 23rd April: A dose of warmer weather during the day and a covering of fleece at night and 10 days later significant growth has occurred. 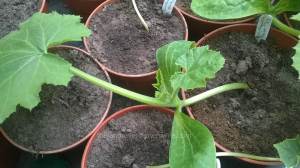 11th May: With the weather continuing to remain warm, the lack of frosts during the night and the fact that there were tiny flower heads developing on the plants, I took the decision to plant the courgettes out into one of the raised beds.

30th May: The plants are doing well in the raised beds and the first flowers are visible now. The following picture has a close up of the flowers in the top left hand side which clearly shows the difference between the female flower (with embryonic courgette behind it) and the straight stemmed male flower.

14th June: We have courgettes!!!! These will swell really quickly, so I will need to keep an eye on them as we don’t like marrow! 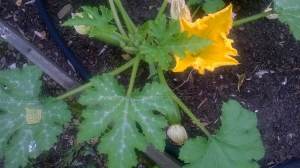 2 thoughts on “Courgette, All Green Bush”