With some of my strawberry plants flowering and a few already carrying the first of this years strawberries, albeit newly developed little yellow berries, I really couldn’t put off the job of tidying, trimming and repotting the plants, any longer. I don’t really have space for all my strawberry plants in the beds and so the vast majority of them are growing in a variety of pots and tubs, although there are 3 in permanent residence in each of the half barrels. All of them though, from last years runners, to the older, more established plants, were looking a tad neglected and so with the sun shining, I set about rectifying the situation.

Firstly I planted 4 of last years runners into the car wheel planter in which my lonely little Jasmine plant was sitting and then I grabbed the first pot of strawberry plants and got to work. This year I opted to replace the compost in the pots rather than just refresh it with a layer of new compost on top of the old.

Slowly and methodically, taking infinite care to minimise potential damage to the roots, I emptied each pot out, carefully removed and separated the strawberry plants, ensuring that any weeds and dead or dying leaves were removed from each plant. Next I gently loosened off the very ends of the root ball to encourage the roots to spread out in their new compost/soil mix before gently placing the plants into pre-watered holes in their new pot and firming down the soil around them. I always water before I put a plant into its’ new home and I do this for two reasons: to help prevent evaporation, as the water is buried along with the root ball; and because I believe that being planted into a nicely damp (not saturated) hole will encourage the roots to start seeking out moisture and food, as well as being less of a shock to the plant itself.

About 20 minutes in, Middle Mudlet appeared at my shoulder: “Can I help?” she asked.

I asked if she fancied doing some weeding in the small bed by the greenhouse which was right next to where I was working and she grabbed her trowel, an empty pot and set to work. We worked on for another 10 minutes or so before Little Mudlet came in search of her sister, grabbed my trowel (she couldn’t find hers) and started to help with the weeding. For the next 15 minutes or so, the peace and tranquility of the garden was periodically broken by the sound of Middle Mudlet trying to tell her stubborn little sister what to do and the aforementioned stubborn little sister telling Middle Mudlet to stop being bossy and to mind her own business ……. and we’ll gloss over the tug of war involving the tub of pulled weeds, the subsequent and inevitable spilling of the contents of said tub, and the disgruntlement of both sisters as they had to pick up every single one of the spilled weeds. 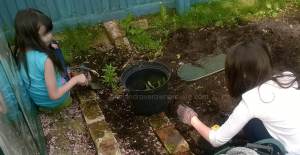 Mucky Mudlets in the garden

It wasn’t very long before Little Mudlet lost interest and opted to go back in to daddy. I looked up as she walked past me and realised that she was wearing quite a large amount of the soil she’d been working in and so she headed in with strict instructions to put her clothes in the wash and to wash her hands and face. A quick glance across at Middle Mudlet and I decided that a  bath for both girls was on the cards for later.

I continued with my strawberries and Middle Mudlet carried on with her weeding. I’d been re-potting for an hour by now and I was only half way through.

“I’ve finished,” said a little voice at my elbow, “Is there anything else I can do?”

So for the next 20 minutes until we were called in for dinner, she brought all the remaining pots from their positions in the vegetable garden, to me which made the job go much faster and she happily took my tub of spent compost, weeds and dead leaves and emptied it into the compost bin for me. She also became adept at recognising a dead or dying plant which was then ruthlessly consigned to the compost bin.

“I think there might be an ants nest in this one,” she said, handing me yet another pot of strawberries but Mud called us in for dinner and so it would have to wait until later.

I went back out on my own after dinner and worked my way through the remaining pots, during the course of which I found no less than four ants nests in different pots, including the one Middle Mudlet had given me just before dinner, and all off which were from different parts of the garden. Once the plants had been removed, the compost balls from these plants went into the councils brown bin (I have more than enough ants in my garden this year thanks – I reckon that a lack of seriously cold weather means that more have survived the winter than normal) and I can only imagine the state of war which must have taken place between the four different colonies, in that bin! 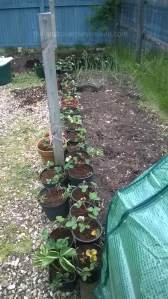 Much tidier and I’m sure the plants are happier

It was a relief to have finished all the strawberries and after a total of 2.5 hours works I can announce that I re-potted 94 plants, most of which went into groups of 2 to 5 per pot, depending on pot/tub size. Added to this total are the 6 from the half barrels and the 4 from the car wheel planter which makes 104 plants in total and around 20 more weak or dead plants went into the compost bin.

In the event I was a bit beforehand with the old delete button, as a couple of days later I came across another couple of strawberry plants which had been moved into the herb area for some reason and then, as I took them back to the vegetable garden, I spotted the hanging baskets …… four of them …… each containing 3 more strawberry plants ….. so, if it ever stops raining, I have 14 more to pot into fresh compost and that brings our total number of strawberry plants to 118.

Middle Mudlet did some quick maths and announced in an awed voice that if we kept a runner from each plant then we would have 236 plants next year …….. hummm, maybe you can have too many strawberry plants for your garden!