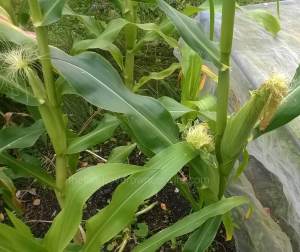 I currently have 4 or 5 ears of corn swelling nicely across three of my sweet corn plants, with the tips of a load more just starting to show themselves on another dozen or so plants. Sweet corn is something for which I’ve had mixed results over the years but when it has been a successful crop, boy has it been worth the time, space and trouble. So it is with anxious eyes that I look over my 36 strong stand of plants each day, hand pollinating the female ‘silks’ of the ears with the pollen covered grains from a neighbouring male flower (officially called a tassel according to the various anatomy articles I’ve read).

Yesterday was no exception. I wondered around the garden checking the various crops for any obvious signs of pest, disease or deficiency: 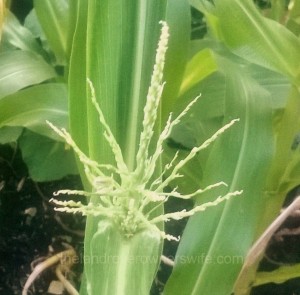 Spot the difference between this …..

As is my habit of late, I stopped to admire the lovely large ears or corn on my favourite ‘Special Swiss’ sweet corn plant. Yes, I know. It’s wrong to play favourites but this particular plant has opted to grow two ears of corn, one of which I intend to keep for next years seed, and so I am nurturing it carefully and watching its’ progress as the ears continue to swell and the silks (the long tendrils which emerge from the top of the ear and catch the pollen grains) start to change colour from pale cream, when they first emerge, to chocolate brown when the corn is ripe. 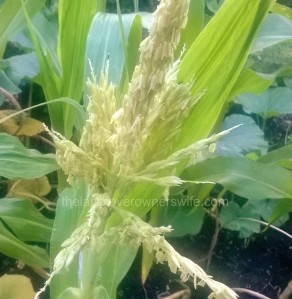 All was well with the ears and I was about to move on when I noticed something odd about one of the flowers that had just started to emerge from the top of a nearby sweet corn plant. A closer inspection of the tassel confirmed that something appeared to have been nibbling on the pollen grains, leaving the first inch of this particular tassel grainless! I glanced around at the other tassels and realised that a few of them also bore the evidence of munching but not as badly as the specimen in front of me.

What was nibbling on my corn? 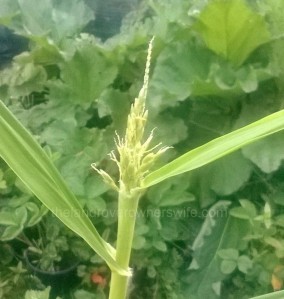 Something has had a go at this one too!

Google is a pretty useful tool for researching all manner of things but it can be really frustrating trying to find just the right combination of words to pull up the answer you are looking for and so it proved yesterday. Phrases such as “What has been eating my sweet corn tassels?” and “Damaged sweet corn plants“, brought back multiple results both on text and image searches but none of them showed or mentioned missing pollen grains!

In the end I gave up and decided to ask those of you who have grown sweet corn if you have any idea what may be causing this damage – not that it’s a problem at the moment, as even the partly damaged tassels have gone on to develop some perfectly normal looking pollen grains and it is possible that the naked tassel I spotted yesterday may be adequately adorned once it’s fully emerged.

But the question still remains: does anyone have any idea what is nibbling at my sweet corn tassels?

4 thoughts on “Who’s been nibbling on my sweetcorn?”