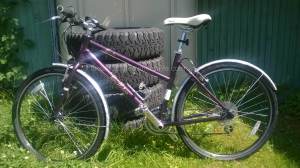 In recent weeks, I have been the only member of the family who has been able to get out on a bike on a regular basis. A huge workload has kept poor Mud tied to his desk late most nights and his well documented ability to attract bad weather on those days he isn’t working, has meant that family bike rides over the weekends have become a dim and distant memory, as what seems to be an entire weeks worth of rain is deposited in and around our village over Saturday and Sunday, making the thought of a bike ride, far from a pleasant prospect.

Of course this hasn’t stopped the Mudlets, who it would appear are impervious to torrential rain and hurricane force winds, from asking to be taken out on their bikes at every given opportunity and so yesterday, with the sun shining I agreed that I would take them out for a short ride. The girls were delighted but there was a catch: the bikes would have to be washed first as they were dirty and keeping their new bikes clean was as essential a part of bike maintenance, as oiling the chain and checking the tyre pressures. Needless to say this statement wasn’t greeted with as much enthusiasm as the first.

As with the wearing of bike helmets, I led by example and took Little Mudlets’ and my bike outside before starting to thoroughly clean mine. It was actually quite pleasant, as once again the temperature was hot and the air was humid, so the occasional splash as I wielded my sponge was quite welcome. A final hose off and I propped my now gleaming bike up against Muds tyre pile, to allow it to dry off in the sunshine.

A view of two halves …. this is the beautiful half.

With my bike washed and out of the way, there was now room for Middle Mudlets bike at the bike washing station (that would be the Mudlets wooden picnic bench) and so I popped inside to fetch it.

“Oh! Are you going to wash our bikes now?” asked a hopeful Little Mudlet.

Two little faces fell but they both trundled outside and spent the next half hour and two full buckets of water washing their bikes, the picnic bench and themselves but they did a good job and their bikes were also left to dry in the sunshine.

A short while after lunch, I grabbed the tube of ‘Dry Lube’ and oiled up all three chains before filling three sports bottles with juice (the girls) or water (me), then we donned bright t-shirts, fastened out helmets and set off. I only planned to take them on a short ride because they hadn’t been on one for a while and I wasn’t sure how they would cope, especially with the heat and humidity. In the event they were fantastic, even if the usually quiet lane I had opted to take them down, turned out to be as busy as a F1 pit lane for some reason. Mind you it was good to see Middle Mudlet putting her cycling proficiency training into practice, without even thinking about it and with Little Mudlet sandwiched between her sister and me, we arrived at the unmanned level crossing which marks the end of this particular lane, in one piece and without incident.

With instructions to the girls to drink half their juice now, I turned to take a quick snap of the countryside we had just cycled through …. well one half of it anyway. Sadly and as is the case for many secluded areas of the countryside, the other side of the lane by the crossing, has been used as a fly tip and everything from actual car seats, shopping trolleys to car tyres, have been dumped and mar what would otherwise be an equally beautiful view.

The thoughtful driver sounded the horn …. to Middle Mudlets’ dismay

Unfortunately, her sister wasn’t quite so happy with the prospect of watching the train come past, not that she doesn’t like trains because she does, especially the class 66 diesel engines which happened to be what was heading ever so slowly our way. No my poor little girl has very sensitive ears (Hyperacusis) and certain noises cause her pain and discomfort, however, she blocked her ears as best she could … although she could have done without the driver sounding the horn as he passed on by the crossing.

Middle Mudlet blocks out the noise

The journey back home was as uneventful as the trip out, although we stopped halfway to finish our drinks, as I didn’t want to run the risk of any of us suffering from dehydration and although they were a little tired, the girls were delighted to have been out on their bikes again and looking forward to their next outing which, with any luck and weather permitting, might even be a family bike ride, as Mud is determined to get back on his bike as soon as possible.