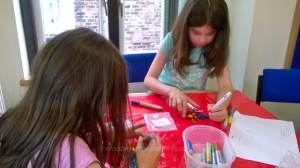 Yesterday morning (Saturday) saw the second of the three crafting sessions I had booked the Mudlets in for, at a local Heritage Centre. Following on from the piggy bank and campervan moneybox painting two weeks ago, today was “sun catcher wind chimes” painting which as the session title says, involved painting a sun catcher with wind chimes attached. There was a suggested donation of £2 each which I was quite happy to pay.

The girls had already chosen which sun catcher they wanted to do when they had attended the moneybox craft session and these were already laid on the table with their names on: Middle Mudlet had opted for a bug, whilst Little Mudlet had decided on a butterfly.

The organisers had supplied a good selection of glass and porcelain paint pens and for the next 45 minutes or so, the girls concentrated on carefully decorating the front and back of their sun catchers which they then proudly showed off to the organisers.

The nature of the paint pens meant that we needed to wait for the sun catchers to dry for a short while before we could pack them up and head off and so both girls prevailed themselves off the wide selection of colouring pictures and puzzles provided by the organisers, for just such an eventuality.

….. was soon joined by a colourful butterfly.

As we headed back through the Heritage Centre, the girls asked if we could have a look around the exhibits and specifically at the Ironage Raft which had been found locally and has pride of place in the main display room, where it is protected by a large, glass case. Although the raft is a sight to behold, it is the 2 foot long ‘to scale’ replica that the girls find fascinating, as it shows the raft as it would of looked and is complete with scale man and ox/cow.

With the raft duly admired and the exhibits glanced upon, we headed out of the door and had a short mooch about town, during which time the girls acquired a gingerbread man (not for long though), a small jotter and a pen each.