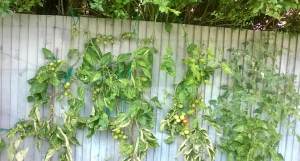 Emergency support for the tomatoes

My tomato plants this year have been a tale of mixed success really, with the Chocolate Cherry proving less than prolific, the Amish paste being slow to grow and reasonably prolific but the Stupice tomatoes, boy oh boy, they have done well. In fact they have done so well that yesterday I had to do some emergency suspension work on my outside plants, to support the trusses which were bending under and in the case of one particular truss, literally starting to come away from the main stem, such was number and weight of the fruit growing. 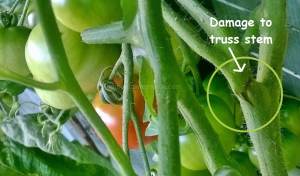 This truss had started to come way from the main stem

It was my friend Christine who spotted the problem with the first truss and with her help and yet more left over yarn (green this time),  I secured the truss to the wires which had been strung across the fence, originally for beans to grow along. To spread the load and to try and prevent damaged caused by the yarn cutting into the laden truss, I looped a long length four times before passing it under the truss and securing it to the wires. I’m not at all sure if this truss will manage to continue to feed the tomatoes because it has split slightly as can be seen in this picture but I will cross my fingers and hope for the best. 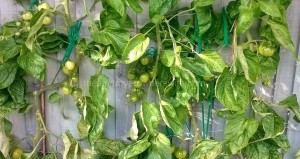 I worked my way along the plants tying up the trusses

With that truss supported I examined the others and realised that most of them were bent over to the point of creating a crease in the truss stem, so once I had sorted tea out, I grabbed the ball of yarn and worked my way along the three Stupice plants, tying the trusses to the wires and the very top ones, to the overhanging hedge branches.

Even the hedge came in handy

My bumper crop of tomatoes were nearly the undoing of the plants that grew them. The position of these plants, in tubs out on the lawn, sheltered by the fence and hedge and yet in full sun for most of the afternoon, has obviously worked well for these plants but I can’t help but think you can be too successful sometimes.

I will have to keep an eye on the damaged trusses to check that all is well but with the first tomato already ripening, it may well be that all is not lost and green tomato soup won’t be putting in an appearance anytime soon.