A couple of hours after we first arrived at the Lincolnshire Road Transport Museum (only to find it closed until midday), we drove back into the museum car park. Buoyed by our spontaneous visit to the Cogglesford Watermill and fueled by a very tasty lunch, we decamped from the pickup truck and headed for the entrance.

Regular readers of this blog won’t be at all surprised to learn that Mud and the Mudlets had been really looking forward to the opportunity to immerse themselves in wall to wall vintage and classic vehicles, though how on earth a Maestro qualified for a spot in the main display area, defeats me but as per normal I digress.

The admission charge for the museum was £3 each for Mud and I but under 16s were free.

On the buses. This was seventh heaven for Little Mudlet

On entering the building Little Mudlets’ excited “Look at all the buses,” rang out but Middle Mudlet headed straight for what at first glance and at a distance, looked like a Land Rover fire tender which at the age of 10, she has already declared is her dream vehicle.

Largely obscured from view by other vehicles, it wasn’t until we got closer that we realised that it was actually a gorgeous Austin Gypsy fire tender and it was hard to tell who was most excited, the aforementioned 10 year old Mudlet or the practically prehistoric Mud. Muds’ delight was compounded when he realised that the Gypsy was sitting in front of (or behind depending on your view point), an Austin Champ painted in what looked like gloss Nato green but is probably called something else entirely.

“Come look at this,” he exclaimed to the girls and I swear that I could see the little boy in him trying hard to escape, such was his delight.

Neither Mudlet paid much heed though, as each was preoccupied: Middle Mudlet was staring longingly at the shiny fire engine red panels of the Gypsy, no doubt imagining herself behind the wheel; whilst Little Mudlet was hopping from foot to foot with impatience, as she was desperate to start clambering all over the numerous vintage double decker buses, that formed the main body of the collection.

Mud and the older Mudlet were finally persuaded to leave the Austins and have a mooch around the rest of the collection. We made steady progress, stopping for various lengths of time at each vehicle, although I am glad to report that the Maestro (what on earth were they thinking!) received the barest of glances and nary a comment from Mud and I don’t believe the girls even noticed its’ existence. 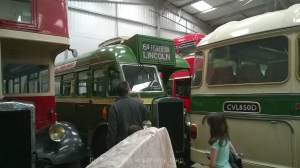 There were yet more buses in the first of the workshops.

“We can go on this one,” squealed Little Mudlet as we approached the first of the buses, “See,” she continued, “there’s no rope!” And with that she disappeared into the passenger section with Middle Mudlet hard on her heels.

I should explain at this juncture that the man on admissions had explained that visitors were allowed onto buses which didn’t have ropes across the entrance and Little Mudlet was on a mission to seek them all out.

Mud followed the girls, answering their questions and explaining bus history to them. The Mudlets then headed upstairs, delighting in such rarities as seats and sliding windows! Honestly you would have thought these children had never seen a bus before, much less travelled on one.

There were probably 6 or 7 accessible buses in this section and the girls clambered into, up and all over every single one, exclaiming over the apparently just-this-second-discovered front seats, back seats, inward facing seats, seats on the top floor, seats at the back of the top floor ….. actually it was fantastic to see the excitement on their faces and hear the delight and enjoyment in their voices. Mud was also thoroughly enjoying himself and relishing the chance to share his knowledge and love of vintage and classic vehicles with the girls.

The workshop bore an uncanny resemblance to my own kitchen.

After we’d seen all the vehicles in that section we made our way through into what at first glance I thought was my kitchen (minus a couple of large buses of course). What with the various oily/rusty/dirty parts, oil cans, tools, paint pots and dirty tags lying around it really did bare more than a passing resemblance to my own albeit smaller kitchen.

Once again, Mud, who was in his element, explained the various tools, equipment etc. to the girls, as we made our way around yet more old buses, although there were also a couple of cars obviously waiting to be restored.

It was as we walked into the third and final indoor space which was another workshop, that I found my favourite, forlorn and tired looking old bus. I’m sure that it will eventually be restored to its’ former glory but it looked a lot like Annie did when we first saw her, sad, neglected and faded, cast into the shadows by shinier neighbours.

Talk about appropriate: this age related plated tickled me.

As we were about to leave this workshop and make our way back to the car, I spotted what has to be one of the most appropriate age related plates I have ever seen and couldn’t resist taking a picture of it.

All in all this is a fabulous little museum, run by enthusiasts and perfect for classic/vintage vehicle nuts. It is small and when we visited it was having work done to create an accessible archive and new entrance which meant the collection was far more tightly parked than usual, as room had been made for the building works to be carried out. Also, with the exception of some enthusiast type books, collectable models and photographs, there weren’t any souvenirs suitable for children which isn’t a bad thing in my opinion.

Looking forlorn and neglected, tucked into a corner, this red bus was my favourite.

We did notice that many of the cars and buses wore valid tax discs and we found out by chatting with a volunteer that the museum does hold open days where it offers bus rides around parts of the city and we may be tempted to revisit on one of these days. Little Mudlet would certainly like that.

Of course Mud was a little disappointed when he realised that there was a serious omission from this collection ……. because whilst for whatever reason it can, urm boast? a Maestro amongst its’ ranks, unbelievably it doesn’t have a Series Land Rover of any description!