As summer draws to a close and school reopens, it is time for the latest round of updates from the Garden Share Collective members, a full list of which can be found on Lizzies blog. It has been a strange summer break for the school garden, as it has been invaded by hundreds of wasps, not nesting but foraging on the sap of the trees which form the Willow structure in the grounds. 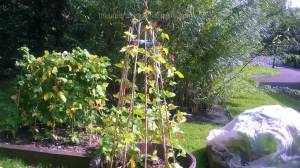 Runner beans and Pole beans are a tad too close the Willow and its’ uninvited diners!

Picking pole beans from the bed beside the willow was quite hazardous at times, when angry wasps kept buzzing over to investigate me and I was unable to let my girls help due to the worry and real possibility of wasp stings. The problem has been dealt with now, as detailed in an earlier post which you can read here but part of the playground remains cordoned off for safety reasons due to the large number of wasps still flying in.

But back to the business at hand. 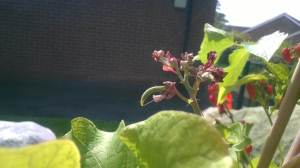 We should be harvesting these beans soon.

This month carrots, beetroot, pole beans, cucumber and tomato have been the main harvests. Unfortunately the first of the broccoli have bolted but the cabbages are hearting up quite nicely. The aforementioned wasps got to one of the 4 plums produced this year but I picked the other three and passed them on to one of the families whose little boy goes to the school. 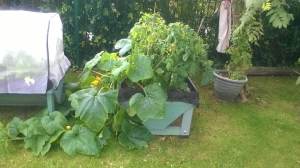 The Foundation Planters got my undivided attention

What has been happening in the garden?

Not a lot to be honest. The presence of the wasps has really restricted the jobs I could get done and I couldn’t even bring the Mudlets’ with me to help. It really has been a case of water and harvest as quickly as possible and get out of there.

Weeding has gone by the wayside, for the most part, although I have removed any nettles as soon as I have seen any. I didn’t fancy the prospect of clearing mature nettles once the wasp situation had been sorted – we seem to grow a particularly nasty variety of nettles around here. I’d rather get stung by a wasp! 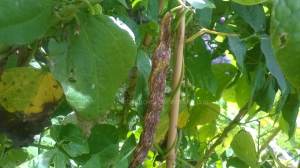 Part of the seed saving program

Thankfully the Foundation Area is some distance from the Willow structure and so that area at least has benefited from my attention. Tomato plants have been trimmed and pinned, carrots and beetroots thinned and most of the lettuces have been composted as they bolted.

What do we need to do this month?

Everything that didn’t get done in August basically. So all the weeding and trimming back of dead or dying foliage.

In addition we need to start clearing the beds and tidying the poly tunnel.

The seeds for saving need to be gathered, dried and stored. 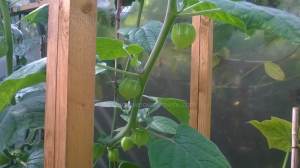 Some of the Inca Berries

The Inca Berries are starting to ripen and so I hope to be able to start introducing them to the children in the form of snacks with yet more tomatoes and cucumber, whilst cabbages, beans and carrots will wend their way to the caterers for school dinners or parents to raise much needed funds.

Whatever happens I will be carrying these tasks out on my own for the foreseeable future. You see Mr Pest Control told us we can expect visits from wasps up to the end of October and judging from the number of wasps that have been in and around the school even after the application of the pesticide on Tuesday, I have no reason to expect otherwise.

So that’s my update for this month (sincere apologies for its’ lateness Lizzie but for some reason your email was dumped into my spam folder and I didn’t see it) and I hope you will take a look at the other blog entries for this months Collective.