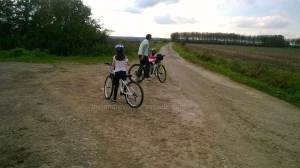 A stop for a drink and to catch our breath.

It’s been quite a while since we have been on a family bike ride due in equal measures to work commitments, the weather and ill health but last Sunday (28th), with the sun shining and everyone in Mudville back to full health (if still tired), Mud and I decided to take the girls on a bike ride. Concerned that due to his lack of cycling in the last four months, his fitness levels would have plummeted, Mud opted for the short run up to a local railway crossing and so we filled the drinks bottles, donned our helmets and set off.

Actually, when I say that we donned our helmets I should point out that the girls and I wore them but whether by design or forgetfulness I am not entirely sure which, Mud didn’t but the girls weren’t impressed (Middle Mudlet really worries about stuff like that and was concerned for daddys” safety) and will be nagging him to wear his helmet next time!

We stopped about halfway to have a drink and to check that everyone (Mud) was okay and not in danger of collapsing any time soon and then continued on our way, arriving at the level crossing quite quickly and with all four of us in pretty good condition and hardly breathing any heavier than normal.

We live in a beautiful part of the country, surrounded by acres and acres of fields, a criss cross of undulating tracks, lanes and roads, with the occasional hill thrown in for good measure. However, along with the beauty and the peace of this rural existence comes the frustrating and frequent use of our picturesque countryside as an impromptu land fill site and such is the case with the land adjacent to the level crossing.

Seats from several cars, supermarket trolleys, tyres and various other items of discarded rubbish, litter the area and it really is infuriating, as it mars the natural beauty of the area, not to mention poses a hazard to the fragile ecosystem and the wildlife that exists there. This particular fly-tip looks to have been arranged into a den, no doubt frequented by local youngsters and this adds the worry of what else might be lurking in the long grass, waiting for an unwary child to find either by walking across it, or maybe fall off their bike and landing on it. 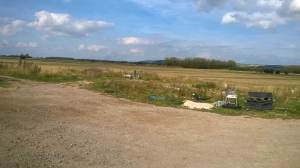 A beautiful view spoiled by trash

Little Mudlet did actually fall of her bike as she and her sister road round in circles, whilst Mud and I chatted with an elderly man who had cycled up to watch the train that was due passed any minute now. Thankfully Little Mudlet fell onto the graveled road rather than into the rubbish and after we broke out the medical kit, was soon sporting a plaster on her scraped elbow.

Once the train had passed on by, we headed for home, not wanting to spend any more time surrounded by rubbish and made it back in good time with all of us managing to complete the ride with only slightly increased breathing and heart rates. Mud would like to get back into the habit of the family bike rides again and I can only hope that other routes are free of the unwanted attentions of the fly tippers and their assorted rubbish and scrap.