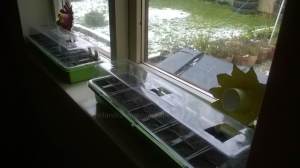 … the process of growing our food that is. With the propagators, seed trays and labels washed and ready for use, a nice new bag of seed compost ready and waiting for the sowing process to begin, all that remained for me to do was to sort out my seeds, set out a potting area on the kitchen floor where there is plenty of space and any spillages can be easily dealt with, and get on with it. Unfortunately and in the best tradition of “the best laid plans…..”, sowing seeds had to be temporarily placed on hold when I was struck down by a dreadful cold which knocked me sideways for a few days.

As a gardener, it is really quite frustrating when fate conspires to foil plans for sowing, digging, planting etc. and this especially true for me this time, as I was already running a couple of weeks late in terms of getting the first of my seeds on the go. But aching limbs, sensitive skin, headache and other associated symptoms, rendered me completely unable to carry out even the simplest of the tasks that needed doing.

Finally, on Tuesday, I began to feel slightly more normal and decided to go through my seeds to find out what I had and what I needed.

Digging about to make sure I had rounded up all my errant seed packets, I came across a bag with a large number of unopened seed packets in it which I had forgotten I had. These were primarily flower seeds and they were all out of date by at least one year. Discarding the odd vegetable/herb packet because I didn’t need them and have found from experience that old vegetable seed doesn’t generally do very well, I decided to hang onto the flower seeds and sow them anyway. I figured I had nothing to lose if they didn’t germinate and a potential flowering spectacular later in the year if they did.

Having sorted through my seed drawers and some other seed packets I had bought back in the Wilkinsons’ sale late last year, I realised that other than carrot, courgette, lettuce, giant pumpkin seeds and seed potatoes, I didn’t actually need that much at all in the way of seeds.

By Tuesday night, with the girls tucked up in bed, I felt well enough to start sowing the seeds. There was an hour before the second half of  ‘Silent Witness’ started and I was able to get pretty much all of the Chilli and Tomato seeds sown in that time. I did have to spend another 15 minutes or so after the programme had ended, finishing off and tidying away but by 10.30pm the black propagators where home to:

All the seed used in this propagator was home saved and as such I have sown copious amounts of each, to try and ensure a good number of seedlings.

With the first two propagators full to bursting, I called it a night, relieved that I finally had the first seeds of the year sown. 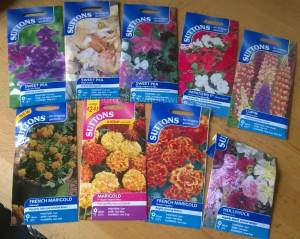 My out of date flower seeds. Fingers crossed for some success with these.

Wednesday afternoon, I set up my work station again. This time I was using the windowsill propagators and inserts we had bought several years ago. These relatively cheap long, narrow propagators are fantastic for use on the more modern, narrow windowsill in our dining room. The only downside to these is that you can’t (or so it would appear) buy replacement inserts for them and so I find myself carefully washing out and reusing them year on year. As with the thin plastic seed trays you can buy to fit into standard sized propagators, the 6 module inserts designed for the narrower windowsill propagators, aren’t really made for multiple use and splits develop in the wall of the modules quite easily. However, careful removal of seedlings, a thorough wash out and safe storage can increase the life expectancy of these trays significantly and it is only when the insert is almost completely shredded, usually in my case from several years use, does it find its’ way into the bin and (if enough have had to be thrown away) a new windowsill kit is purchased.

That said, even when some of the inserts are beginning to look very tatty indeed, the careful application of silver duct tape can eke another growing year out of them and so it was that the first job I found myself doing on Wednesday, was the inspection and repair of some of the inserts. I was also able to repair a split which was appearing in the main body of the propagator with more duct tape, before beginning the process of sowing more seeds.

Just over an hour later and two of the windowsill propagators were in situ on the dining room windowsill, packed to the gunnels with: 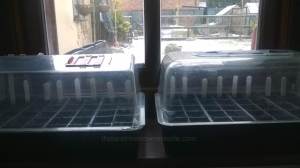 Lots and lots of chillies and tomatoes

If I get a reasonable to good rate of germination from the out of date flower seeds then I will sow more in a few weeks, to hopefully give me a nice display throughout the summer months. There are more flower seeds to sow but they are from march onwards.

Now begins the obsessive watching of the propagators for signs of life, despite knowing that the minimum germination for any of the seeds sown is 7 days. It’s a gardener thing. You worry and fret that the seeds haven’t got enough water, have too much water, are too hot, too cold, not viable and so on and so forth until the first specks of green begin to show. With the outside temperatures dropping so low on a night time, I will be moving the propagators off the windowsills last thing at night and putting them onto the kitchen sides, to give the seeds the best possible chance at germination. Fingers crossed and watch this space.