Mothers Day in Mudville over recent years, has involved hints about gardening related gift suggestions, usually along the lines of seeds, gardening gloves, seed compost etc and this year was no exception and I was thrilled to received King Edward and Duke of York seed potatoes. I had been dropping not so subtle hints about my kings most of last week and so to receive two bags of kings and a bag of dukes was a bonus, even if I now have a problem in terms of space. You see, with all of the available downstairs and one of the upstairs windowsills, already home to propagators, availability for egg box lids full of seed potatoes, was severely limited.

On an offer, I got far more tubers than I was expecting

That said, finally having seed potatoes chitting is a huge relief to me, as I like to have a significant amount of healthy growth on the tubers when they are planted out but as it turned out, the Dukes had already taken it upon themselves to start without me and had achieved 3 or 4 inches of growth in their bag. I selected the largest tubers from each of the three bags (the 2kg seed potato packs had been on an offer at the garden centre) and now have 20 King Edwards on the one remaining spare windowsill upstairs and 10 Dukes of York on the shelf in the stairwell which is extremely well lit due to one very large window. 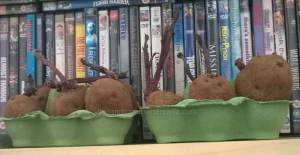 The Duke of Yorks had started the party on their own

I’m in two minds about whether or not I should remove all the leggy growth from the Dukes of York and let them start again and need to do some research into what’s advisable in this situation but either way, I’ve already removed the sprouts from all but the topmost parts of each potato, across the two varieties, a job I will continue to do until the tubers are finally planted out. Removing these additional growths encourages each seed potato to put all of its’ energy into producing a strong set of main stems.

I have another 20 King Edward and 10-15 Duke of Yorks still in the bags and need to work out what to do with them because I really don’t want to waste them but with 30 tubers already chitting, I will be hard pressed to find room for the extras in our patch, although Mud has come up with a frankly brilliant idea on how to create a stackable potato growing container which can be placed anywhere and is reusable …… but more on that later in the season. 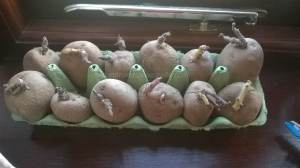 But then, so had the King Edwards but not so dramatically

With the seed potatoes gratefully received and sorted out on Saturday, Sunday morning (Mothers Day in the UK) brought with it further gifts from my girls:

Flowers, although I will have to wait a few months before I can enjoy them, as these have come in the form of seeds, including Sweet Williams Early Summer Scented, a dwarf Delphinium Magic Fountains Mixed, Cottage Garden Border Perennials Mix, French Marigold Marionette Mix and a Birds,Butterflies and Bees Wild Flower mix;

Another hint was also correctly interpreted by the Mudlets’, resulting in two packets of pumpkin seeds: Invincible which looks tho be a white skinned variety and Jack O’Lanterns;

I also received a packet of Melon Pepito and two more 1000 piece jigsaw puzzle, one of which I had already started when I took the header picture and so wasn’t able to include in the photo because ….. well ….. urmm ….. I have some strange self-imposed rules when it comes to building a puzzle and NOT looking at the box picture once I have started the build is one of them.

Mothers Day for me was topped off with a Sunday Dinner cooked by Mud which was delicious and I spent the evening puzzling away and happy with my lot.

2 thoughts on “A Gardeners Mothers Day”