The areas under the fleece frames are full to bursting

You may remember that back in February I thought that I had a problem called ‘Damping Off‘ in my seed trays, as my seedlings did not appear to be doing so well. So to ensure that we had sufficient tomato, chilli, sweet pepper and cucumber plants for the year, I sowed a whole load more and hoped for the best. Well it would appear that ‘Sods Law’ has kicked in because despite my fears to the contrary, the original batch of seedlings all pulled themselves together and suddenly decided to thrive which I am convinced wouldn’t have happened, had I not sown replacement seeds (that’s the ‘Sods Law’ bit) AND the replacement seeds have also germinated in huge numbers and thrived.

From running the risk of having very few viable plants due to the supposedly ‘Damping Off’ fungus, I now find my self with over 100 tomatoes seedlings across 6 varieties and in excess of 70 chilli plants over 3 varieties. Thankfully cucumber numbers are relatively low at 9, as are sweet peppers at just (said with a sardonic tone) 19. However, the sheer number of seedlings has provided me with quite a challenge in the short term – how on earth am I going to fit them all into the greenhouse.

Actually, to be precise, there is more than sufficient room in the short term for all these baby plants, whilst they are in small pots but once they are ready for potting into the next size pot, space will definitely become a problem. That said a percentage of each will be heading to school and a couple of friends have already said they will happily take some of the tomatoes and chillies off my hands and I may decide to take a table at the school summer fair to sell some on.

No, at this stage of their development space isn’t the issue. The problem is protecting the delicate seedlings from the overnight drops in temperature and frosts because I only have enough fleece to cover the two frames I set up last week (as shown here) and these were already pretty full after my re-potting stint a few days ago and with another tray of sweet peppers and tomatoes not to mention another with some 40 plus chilli seedlings and 5 cucumbers needing potting on, I had a bit of a problem.

And so my thinking cap went on again and I pondered …….

I decided to move the flower seedlings and dill out from under the protection of the fleece to another bit of staging, as I felt these were probably a little more hardy than the vegetables. This made enough space for the tomatoes and cucumbers, under the fleece framework but only if I moved the existing and newly potted sweet peppers out of the way but I had a plan for an improvised frost protection for these and the chillies still waiting for potting on. But then another issue raised its’ ugly head when, at this point, I realised that with 47 chilli seedlings still to pot on, I was about to run out of small plant pots and this meant I had an even bigger problem than I had originally thought! 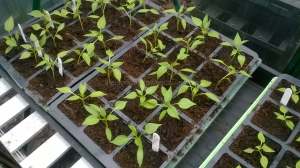 Another ponder and a coffee break followed. I couldn’t pot this number of seedlings into the next size up pots because not only would my plan for frost protection not work but I really didn’t have the space left in the greenhouse. As I walked back into the house for my much needed caffeine break, my eye was caught by the propagators and trays which I had brought in ready for the next round of seed sowing which I planned to do just as soon as I had created space on the windowsills, hence the full on re-potting session.

Of course! Perfect! If a little untoward.

I have two different types of inserts for my small propagators: a 40 module type which has small modules which I generally use for the sowing of smaller seeds; and a 15 module type which has much larger modules which are normally used for things like squash, pumpkins and legumes. It was one of the larger ones, brought in ready for sowing the pumpkins and winter squash seeds, that caught my eye and I realised that each one of the modules in this insert, probably held the same volume of compost as one of my small pots! I have three of these larger module inserts which was just about enough to accommodate all my chilli seedlings.

Back in the greenhouse and the chillies were soon sitting in their new homes, in small propagator trays which also happened to fit in nicely with my frost protection plans. Once I had finished for the day I covered the chillies with propagator lids and then covered the whole shelf with a double up piece of the micromesh I used to protect the crops outside. I figured that the fine mesh would be more than sufficient to insulate the delicate plants in the propagators below from the frosts.

Pleased with my solution, I put the fleece covers back over the frames for the remaining plants and went back indoors, happy with the work done, the solution found and safe in the knowledge that should Jack Frost pay us a visit overnight, my precious seedlings would be oblivious to his presence, snug and warm under their blankets.

Tip of the Day:

Applying hand cream to your hands BEFORE attempting to use fleece, makes the whole job much easier as it helps prevent the fleece from catching on rough or dry skin.

3 thoughts on “Improvisation in the greenhouse”