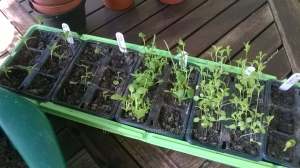 My Mothers Day seedlings have done well so far.

By Thursday last week, I was feeling much improved and spent the morning catching up with the housework. Both girls had running club after school which meant that I had a whole hour extra in the afternoon which, as it happens, was another beautifully warm and sunny affair and so I decided to set up my potting station on the garden table, under the shade of the parasol and pot on the seedlings which I had grown from my Mothers Day seeds.

All of the varieties of seed sown had germinated, even one of the melon seeds although there is still no sign of any of the other five, and so I had some Dwarf Delphiniums, French Marigolds, Sweet Williams and a Cottage Garden Border Perennials mix to re-pot, the latter of which was to prove quite challenging, due to the sheer number of individual seedlings that had grown, some of which were large, sturdy looking individuals and a fair number of others which were tiny, delicate things, that needed extremely careful handling.

Potting on in comfort.

With my compost bag and watering can by my side, I set to and found much needed peace and quiet, as I worked, bathed in the warmth and light of the sun. Before long the seedlings were all sulking in their new pots and I transported them down to the little greenhouse to join the flower seedlings from an earlier sowing. As is the way with newly potted on plants, a few of them looked a little droopy at this stage but by the time I shut the greenhouses up for the night, a couple of hours later, most were looking much happier. As of today (Monday), all of them are looking perky and I have high hopes that in due course they will all be adding more colour to the garden.

Contrary to expectations, we had a pretty good weekend in terms of the weather, with a mix of sunshine and showers on Saturday but Sunday dawned another bright and sunny day, albeit a little cold first thing. By mid day, the temperature was warm enough for Mud to suggest a family bike ride – just a short one, as we haven’t been out on the bikes for a few months, although I had restarted my twice/three times per week rides a couple of weeks ago and Mud and Little Mudlet had been on a short ride the previous weekend.

The Cottage Garden Mix was quite a challenge to re-pot.

Middle Mudlet has a problem with double jointedness and over pronation of the feet which causes her pain in her knees and so hadn’t been able to go with Mud and her sister on their ride but this week she felt she could manage a short distance and so it was decided that we would all go out, so that I could stay with Middle Mudlet if she struggled and Mud could continue on with Little Mudlet.

There were a lot of tiny seedlings in amongst the larger ones in the Cottage Garden Mix.

Both girls are taking part in the Tata Kids of Steel triathlon in a couple of weeks and so they need to get in some training (hence running club) and so the biking will help them with that phase. Obviously with Middle Mudlets’ knee problems, we need to have a softly, softly approach and so this was the first step towards preparing her for the event. As it happened, both girls did really well on our bike ride and Middle Mudlet went a little further than she thought she would but not as far as her sister and her knees didn’t bother her too much. She was a little sore this morning but that may well be due to the fact that she hasn’t ridden her bike since October last year. Weather permitting, I plan to take them out after school, a  couple of times this week to get in some more training.

Out in the beds, the Rhubarb is looking the best it ever has.

Bike ride over, we retired to the garden to make the most of the sunshine and, as I pottered around the garden, Mud and the Mudlets played chess. Eventually Middle Mudlet wondered up to the vegetable patch and asked if there was anything she could do to help me and spent the next hour weeding the beds for me, as I sorted out the plants in the greenhouses. Little Mudlet did join her sister for the last half hour and between them they cleared most of the weeds and all of those pesky tree seedlings out of the beds, earning themselves some pocket money (which they don’t know about yet) and an ice lolly.

With the temperature outside staring to drop, we eventually headed indoors but I felt a whole lot better for spending time in the garden, with my family.