Between them, the girls did a grand job.

As a child, stickyweed (aka Goosegrass, Clivers, Catchweed and Robin-run-the-hedge to name but a few) was a delight to behold and provided hours of fun for my friends and I, as we each tried to cover our companions with the stuff, inadvertently transporting dozens of the sticky balls (seeds) to areas hitherto uninhabited by stickyweed and no doubt creating infestations of nightmarish proportions for the gardeners of the time. Picking the tiny little balls off our clothes and discarding them wherever we happened to be, was a necessity, if we wanted to prevent an exasperated outburst of “Look at the state of you! What have you been doing?” from our respective mothers.

Well to all those gardeners who spent hours trying to rid their gardens of this unwanted invader, I offer up my heartfelt apologies.

With some of my young flower plants needing to be planted out, I bit the bullet and set about weeding and clearing the main flower bed by our back door. This was a job I had been putting off for a while because all down the length of the bed could be seen masses of stickyweed, a fair few stems of ground elder and another weed which had spread with equal enthusiasm and aggression, the name for which I have no clue. 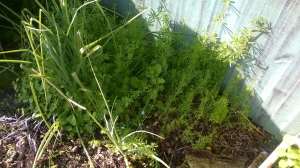 I was relieved to see that the stickyweed was ball free which meant that I had a better chance of clearing the majority of it without running the risk of dislodging the seeds but it was everywhere, having spread between and around the bases of the plants we actually want in the bed. Great handfuls of the stuff went into the brown compost bin, along with the odd leaf from the plant it was growing on, as I tugged and pulled and dug to get as much of it as I could. I know that I have missed some of the smaller bits but these will be removed as and when they are large enough to get a good grip of.

Anyone know what the yellow/green weed is?

The second of the weeds, is a mystery to me and I am hoping one of you readers will be able to identify it for me. It had spread along at least half of the bed but was relatively easy to pull out. It’s the yellow/green leafed stuff that is thickly amassed along the lawn edge in this photo. It was very satisfying to pull out each stem and very soon large areas of vacant bed appeared, ready to receive my hollyhocks, cosmos and zinnias. 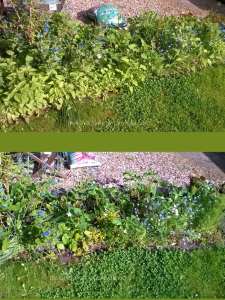 With that bed weeded and with the Mudlets engaged in weeding the gravel paths in the vegetable garden, I moved onto the next bed, the one from which I had removed the ivy from last year (well most of it at any rate). Stickyweed had found its’ way into that bed as well and soon joined its’ friends in the compost bin, as did a couple of tendrils of ivy which had escaped last years removal and were seemingly intent on climbing the extension wall again.

Of course weeding isn’t anywhere near as much fun as planting out seedlings or sowing seeds, so before long the girls abandoned their weeding and started to play instead. I have to say though that they had cleared quite an area and I was extremely grateful for their efforts. I cleared more of the stickyweed from some sections of the vegetable garden but I have noticed that there is still some in the more difficult to reach areas which will have to be cleared.

Another plant that is spreading rapidly over one area of the vegetable garden is Herb Robert. It is a really pretty plant to look at but it is taking over in one corner and is another plant on my hit list for removal, as I don’t want it taking root in the beds – I fear it would be a difficult one to eradicate if it did. I already have enough issues with the annoying Mares Tail which is popping up every where and needs constant pulling up.

A sink full of wild flowers

For the time being though, I’ve cleared quite a lot of the problem plants and some of my own seedlings have taken up residence amongst the established inhabitants of the flower beds, whilst in the old sink, many of the seeds from the wild flowers packet I was given for Mothers Day, have germinated and have survived pigeon, slug and snail attacks, resulting in a lovely covering of healthy looking seedlings. I’ve had a couple of days of planting on and sowing seeds and so tackling more of these troublesome interlopers, is next on my agenda …… I wonder if I could persuade the Mudlets to help some more?

5 thoughts on “Stickyweed and other nuisances”