Having purchased a family season ticket for Normanby Hall Country Park, back in April, this Wednesday, with the weather set to be bright and sunny, I decided to make use of the ticket and took the Mudlets to Normanby for a picnic. Not just for a picnic, although that had been a promised treat from the start of the summer break, but for a mooch about and a peek at the newly opened water splash play park within the grounds.

We arrived at a little before 11, to find a reasonably busy car park but we were able to find a space in the main parking area, although many of the larger cars were already being directed onto the overflow parking in the large field by the entrance. Leaving the picnic in the car for now (I had put ice packs in with the food), we set off. The Mudlets wanted to have a look at the new splash park and so we headed in that direction.

En route we came across another new feature which we hadn’t been aware of but with which the girls were thrilled ….. a pets corner area and we were delighted to see a pair of alpacas, the female of which was accompanied by her adorable looking baby. Sheep and goats shared the pen with the alpacas but, to be frank, were well and truly over shadowed by the baby. 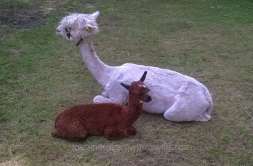 This baby stole the show

Friendly pony with his shyer pal the donkey

In another section, a friendly black and white Shetland pony shared a pen with a much shyer donkey and there were also a couple of aviaries providing shelter to a number of fowl including ducks, geese and turkeys. The piece de resistance for the girls however, was the rabbit run and it was here that they were given the chance to cuddle a rabbit each. Sitting quietly they were each handed a rabbit and spent a few minutes stroking the soft fur before the handler carefully placed the animals back into the shelter. A really good feature of the pet area was the antibacterial spray dispensers which could be found attached to each of the pens with large signs encouraging people to clean their hands after visiting each enclosure. 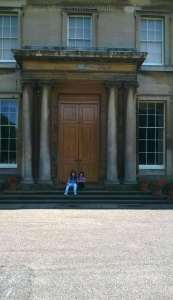 Dwarfed by the hall door

Moving away from the animal pens, we arrived at the splash park and the girls were delighted to learn that, so long as it was fine with me, they could go in as they were. I had been told by another parent a few weeks ago that you had to have special shoes to go into the water park but this wasn’t actually the case and, although aqua shoes could be bought from the gift shop, any non-slip soled footwear was allowed, including the trainers the girls were wearing. In fact the staff member over seeing the water park commented that trainers were probably safer than other types of footwear, as they offered more grip. As the sun was shining and we were due to be at the park for at least three hours, so there was plenty of drying time, I agreed that the Mudlets could stay and play which is why half an hour later, I left the splash park with two very wet but happy children. I haven’t any pictures of the splash park because photography is forbidden in that section but we will go again and next time the girls will go prepared with swimsuits and towels. The only downside is the lack of changing facilities and the toilets are really too small for that purpose.

Sopping wet, the girls squelched beside me as we headed for the walled garden to see what had changed since our last visit in April. The area immediately outside the walled garden was now home to a number of square beds, cut into the grass, containing what looked to be chard and the like. However, the most striking aspect of this section of the garden was the row of extremely high sunflowers that lined the wall, many of which had surpassed the top of what must easily be an 8 foot high structure. Entering into the walled area we were pleasantly surprised by the array of plants now in full flower and were extremely impressed with the Cardoons which towered over the Mudlets. Chatting to the gardeners, it was interesting to note that much like my own garden, they had experienced problems with their pumpkins this year, in so much as the larger variety plants had proved reluctant to vine until very recently and, as a result, only the smaller variety had much in the way of fruit to show but the pumpkins we saw on those particular plants were looking pretty impressive.

The walled garden left as you enter the gate …. 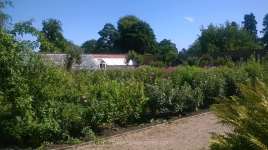 …. and right as you enter through the gate

Outside, the sunflowers towered over the wall

Next on the agenda was a stop at the cafe for a cup of tea and biscuit (me) and ice-creams for the girls. We had already bought our tickets for the land train (£1 each) which is a sedentary paced ride, along part of the pathway, traveling along part of the length of the deer park fence and then back again. It took about 10 minutes but it gave us an opportunity to spot quite a number of deer, albeit some distance away, as we passed the conservation area of the deer park. 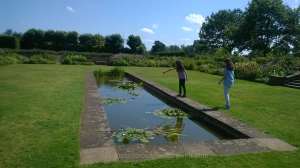 The sunken garden was looking beautiful

After we had eaten our picnic, we decided to take a stroll along to the sunken garden and then into the public area of the deer park itself. We’ve been to Normanby Hall on quite a few occasions over the years but have never actually taken the time to walk through the deer park itself. The sunken garden was looking truly beautiful and the girls did some frog spotting amongst the lily pads that were growing in the rectangular pond which is situated in the centre of the garden before climbing back out and heading towards the gate to the deer park. 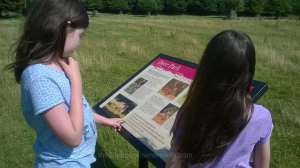 Reading the information board

Having ensured that the gate was securely fastened behind us, we took a few minutes to read the information board and then we began a gentle, quiet walk around the perimeter of the public area, looking out for deer as we went. The public area of the deer park isn’t actually fenced off from the conservation section in which the deer live and so there is always the chance that a deer may well wander into the public section but as you can see from the pictures, the public area offers no where near as much cover for the deer and so I’m guessing that it would be unlikely for one to amble in whilst the public are about. ‘No public access beyond this point‘ signs designate the end of the public area and we stood for a few minutes, catching glimpses of several deer in the distance, as they moved within the tree line. Quietly and carefully, we made our way back to the gate and headed back into the main area of the Park.

The public section of the deer park

“Can we go to the farming museum?” Middle Mudlet asked, as she likes looking at the old farm equipment at the on-site museum.

“But I want to go to the stables!” Little Mudlet put in. She’d seen what looked like the outline of a horse, through the open stable door, whilst we’d been at the cafe.

As the stables were on the way to the museum, I decided we’d walk back through the stable yard and onto the museum that way, thereby meeting the wishes of both girls.

Walking into the stables we were met by the sight of two horses with riders – a wooden one in one stall which had been used to cast the bronze one in the other stall. The sculptures were really good and life like but I think Little Mudlet was a little disappointed that they weren’t real.

The view from the mezzanine in the farming museum

Moving onto the museum we passed through the animal corner again, to the delight of both girls and were lucky enough to see the baby alpaca feeding from its’ mum. I did feel sorry for the little one though, as it was being thoroughly plagued by flies around its’ eyes and muzzle. The museum hadn’t changed that much from our last visit, although the section that had been closed off for refurbishment back in April was now open. We wandered through the new exhibits in that section with Little Mudlet pressing the audio information buttons and gleaning all sorts of information from which she began to quiz Middle Mudlet who, not having listened to the various narratives, didn’t know the answers and soon got annoyed with her younger sister who was taking great delight in filling in these woeful gaps in Middle Mudlets’ knowledge.

The Lesser Spotted Shiny Back Lizard

By now both girls were dry, it was 2pm and we were exhausted. The obligatory stop at the gift shop saw both girls buying these rather beautiful lizard toys which are about 18 inches in length and filled with what feels like the sort of filling used for fabric doorstops (if you know what I mean) which makes them quite heavy. I like the gift shop at Normanby Hall because it isn’t filled with shelves of ‘expensive for what they are‘ plastic toys that will break within the first five minutes of play. No by and large, I think there is a nice range of reasonably priced gifts which will really be a souvenir that you will want to keep, including the aforementioned lizards which were only £4.50 each which, I am sure you will agree, is actually a pretty good price for what are good quality, substantial keep sakes.