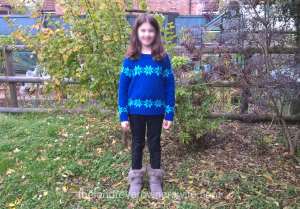 I’m feeling rather pleased with myself at the moment because last night I finished Middle Mudlets’ snowflake jumper, pressed it first thing this morning and she has happily modeled it for me for blog photo’s and has declared herself delighted with it. Now with this sweater under my belt, so to speak, patterns which require me to work with more than one colour of yarn at a time, no longer hold as much trepidation as they did, although I may need to make a couple more simple designs before feeling confident enough to try tackling anything as complicated as a multi-coloured Fair Isle pattern.

The sweater even looks cosy and warm in the pictures

That said, I have to admit that there are places where the snowflake stitches are a little too loose or too tight and you do get the occasional glimpse of the lighter blue runs of yarn behind the areas of dark but there are no glaringly obvious areas where these can be seen from afar and I’m fairly sure no one is going to be peering at it close up, so I can live with these little errors and improve on my technique for next time.

Overall I’ve enjoyed making this little sweater. The pattern itself is a ‘Womens’ size, spanning 28/30 – 44/46 inch bust, but I think that the smallest size is a nice fit for Middle Mudlet, who is quite tall for her age. Certainly the finished garment doesn’t appear to swamp her and the colours suit her very nicely.

As for the working of the sweater, the snowflake charts were easy to follow, although the writing was a little on the small size for my tired eyes sometimes, and I was pleasantly surprised as to how quickly they knitted up. The increases and decreases did worry me a little but again, the clarity of the charts made the whole process relatively painless and the few mistakes which I made knitting the snowflakes and had to frog back, were entirely my own fault, caused by tiredness, distraction or simply not reading the chart properly.

Oddly enough it was the sewing up which was the hardest part of the whole make, as the shadows cast on the royal blue made it a little difficult to make a nice straight seam but I got there in the end and the lighter snowflakes match up quite nicely and, though you can’t see them because of the darker colour, the side seams follow a column of stitches up in a nice straight line and the increases on the sleeve seam match perfectly. Mind you I wasn’t feeling too well whilst trying to sew the sweater up which didn’t help things but I knew Middle Mudlet was keen for me to get it finished and so I persevered. Little Mudlet took a picture of me snuggled up on the settee, wearing the cashmere scarf Eldest Mudlet had bought in Portugal and given me for my birthday, pulling out some of the sleeve seam stitches to re-work them …… again!

So there you have it, I’ve faced one of my knitting nemeses and if I have not exactly conquered it, I’ve made significant inroads into relegating it into the role of just another knitting technique learned and buoyed by my success, I have decided to face another by attempting to knit a hat using circular needles. Circular needles and I have never got along but I figure that if I can knit a snowflake or three without making it look like a pigs ear, then I can master the art of knitting in the round …….. and if I say it often enough I may even begin to believe it!