A new toy for me: my fabulous gingerbread village mould

We received a surprise package the other day, a parcel of gifts from Chuck in America and one of the items was this really rather special looking silicone gingerbread village cake mould. I couldn’t wait to try it out but Mud reminded me that it was a Christmas Present and so I put it away and tried not to sulk too much. Then in an email to Mud, Chuck commented that he would be watching with interest to see if a post on using the mould appeared on my blog and that was all the encouragement I needed to get baking. I’ve never used a silicone mould of any description before and so I read up about other peoples experiences and with a mixture of apprehension and excitement, I set about trying to make a gingerbread village. 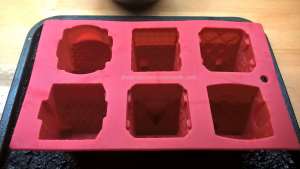 And the other side

My first dilemma was which recipe should I use. I really wanted to make a proper gingerbread biscuit village but couldn’t work out how to prevent the dough collapsing in on itself during cooking. I guess I could use baking beans or rice and I will try that at some point in the next week or so but for here and now, I wanted to try a gingerbread cake mix. After a little more research, I came across this recipe for gingerbread cupcakes (Sallys Baking Addiction) and decided to give it a try

Being in the UK and not having molasses as a store cupboard staple, I substituted a 50/50 mix of treacle and golden syrup and before long, I had a lovely batter ready for baking. My next dilemma was whether or not I should grease the mould. About 99% of everything I had read, suggested that one of the beauties of silicone baking trays was that no grease was needed. So taking a leap of faith, I poured the batter into the tray.

how much is enough? Not this much evidently.

The one thing you need to remember about silicone baking trays though, is that they become very flexible with heat which could prove interesting whilst trying to remove a baked item from your oven and so I placed my mould onto a flat metal baking tray before pouring the batter in. Pouring the batter brought with it another decision ……. how much mixture would I need in each compartment? Too little and the cake dome would not allow for the squaring off needed to create a flat base for each cake once cooked. Too much could result in a large overspill. I settled for a little over half way and popped the tray into the oven. About 40 minutes later, the cakes were cooked and it became immediately apparent that I hadn’t put quite enough mixture into each. Nevermind. Next time I’ll put more in.

Unfortunately, Mud being Mud, erroneously decided that his engineering precision background, gave him some sort of right to  pass comment on the slight shortfall.

“They haven’t risen enough to make the bases,” stated he-who-has-never-baked-a-cake- in-his-life, followed with, “you need them to have risen more to be able to level off the top to make a level base!”

And here in, dear reader lies the difference between the engineer and the baker:

Ooops! I don’t need and engineer to point out the obvious thank you!

Engineering is a precise world in which A+B=C, no matter how many times you make or do something because the measurements, materials used and environmental factors are the same each time and the end result is the same each time. It has to be. There is virtually no room for manoeuvre. Lives may depend upon it;

In the baking universe however, A+B should =C but no matter how carefully you weigh out all the ingredients, follow the same method, use the same oven etc, the end result from one bake will not necessarily mirror that from an identical bake at another time. Even the level of rise achieved will vary and there is really very little you can do about it!

So for future reference please remember that engineers who have never baked, should not presume to pass comment on the finished products of bakers, other, that is, than to say “Wow, that looks good!”, or “Yum, delicious. Well done!”

Putting aside the issue of the bases, the cakes looked pretty good and the aroma of gingerbread permeated the house, bringing a distinct air of Christmas to Mudville. Now all I could do was wait until the cakes had fully cooled down before I could remove them from the mould. Having read loads about how easy cakes were to remove from silicone moulds, I was really quite impatient with the whole cooling period but finally the moment arrived and I flipped the mould over onto a flat wooden breadboard and “Hey Presto!” ………

Nary a slip or a slither of movement from the little cakes! 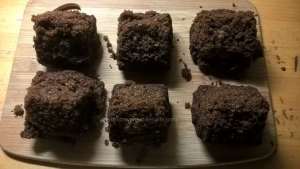 In need of some restoration – but they were delicious.

In the end I had to gently encourage the cakes out and although they kept their basic shapes, the detail of the mould was lost and a fine layer of cake was left attached to the inside of the silicone.

Perhaps I should have lightly greased the mould after all? Or maybe the cake batter was too sticky and not suitable for moulding? Either way I’m not at all despondent as this was an exploratory exercise in the performance and use of the mould and next time I shall try either lightly greasing the mould (if making cakes) or using baking beans/rice in the centre to make actual gingerbread biscuit houses.

Lack of detail aside, we still ended up with 6 little cakes and I decided that these would be a lovely dessert to serve with custard, after our Sunday Lunch:

“I don’t like ginger cake!” the engineer said to the baker!

3 thoughts on “A (derelict) Gingerbread Village for Chuck”