A little while ago I sorted through my seeds, throwing away the very out of date ones, seeing what I had left and making a list of what I needed to buy. Thankfully I’d managed to buy several packets of fresh seed, in various sales at the end of last summer and so I only had half a dozen packets to buy. My next job was to draw up a seed sowing timetable and for this I decided to utilise the calendar and Quick Note app on my phone. 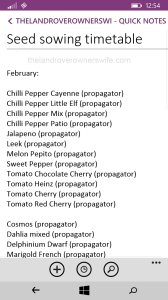 I started a new file on Quick Note, imaginatively titled ‘seed Sowing Timetable’, and then listed all the seeds by first recommended planting month, with all the vegetables seeds for each month listed first (and alphabetically), followed by the flower seeds for that month (also in alphabetical order). Then on my phone calendar, on the first of each month I entered reminders in respect of seed sowing, as by doing this, I’d receive a prompt a week before hand, giving me chance to purchase compost, pots etc. I’d  then be able to check my timetable file and see at a glance which seeds were due for sowing, saving me from having to check each individual pack.

My phone calendar acts as a reminder to check the sowing timetable.

Just as planned, during the last week of January, my ever helpful phone reminded me that the first seeds were due to be planted in February and so I popped down to the greenhouses, raked out a couple of propagators and seed tray inserts and set about thoroughly cleaning them, ready for seed sowing. Then on Saturday, I set out a protective covering in the kitchen and began sowing the first of the seeds, with some help from Little Mudlet.

An hour later, two small black and one windowsill propagator, were fully occupied as follows:

Chillies, Tomatoes, Melon and Sweet pepper are in these

So in total I’ve sown 76 Chilli seeds across four varieties and 72 tomatoes, also across 4 varieties but some of the tomato seedlings will go to school. Hopefully this should be enough chilli seeds to produce a respectable number of healthy plants, allowing for some germination failure. That said I might sow a few more chillies, in a week or so ……….. just to be sure I have enough of a crop to make sweet chilli pouring sauce and pickled chillies come the autumn! 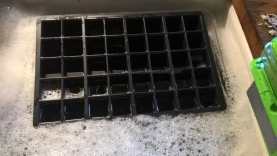 Washing the propagators and trays is essential in producing healthy seedlings 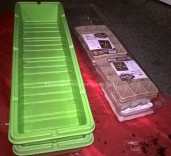 2 thoughts on “Another year, another season begins”