There are certain things in life that really shouldn’t be seen in public and on Good Friday, I was one of those things. I’ve never been one to worry about fashion at the best of times, believing that comfort is far more important, and this is especially true whilst working in the garden but Friday morning I drew the line and when Mud asked me if I’d mind standing on the front drive and keep an eye on his tools for a few moments (he was doing some work on Annie) whilst he was otherwise engaged, I put my foot down with a firm hand and refused point-blank.

Greenhouse cleaning crew – before water and a light breeze metamorphosed my hair into witchesque proportions!

Dressed for greenhouse cleaning, in an oversized ‘tent’ top, very worn out (and holey) cut-off jeans, chunky waterproof boots and with hair that wouldn’t have looked out-of-place on one of the Macbeth witches, I was the stuff of nightmares, the sort of thing that once seen can NEVER be forgotten and whilst my own children are accustomed to my total lack of style whilst gardening at home and are acclimatised, numbed if you like, to the horror of the image before them, I didn’t think I should run the risk of frightening other peoples’ small children. No, the image of the greenhouse cleaning Mrs Mud is not for public consumption, well not in the flesh anyway!

Good Friday was a beautiful day, warm and bright,the perfect sort of day for cleaning greenhouses which was just as well because I desperately needed to move the tomato seedlings outside, to free up some windowsill space for more seeds. With Mud and Little Mudlet on the way to Halfords for more car cleaning stuff and stopping off to get a few bits of shopping for over the weekend, I decided to grab my opportunity (and the hose pipe) and get the smaller of the greenhouses washed. With my energy levels still low, I realised that I could probably do with some help and so asked Middle Mudlet if she could spare an hour. She happily agreed, afterall anything would be better than tidying her bedroom which was the task she was busy with at the time.

It was a very green greenhouse

“It really is a green house!” she commented, as we contemplated the filthy little structure a short while later, and she was right. I had never seen so much algae on either greenhouse, due in no small measure I think, to the damp, cool/cold but not freezing winter we’ve had this year.

As we scrubbed and rinsed both sides of the polycarbonate panes, I realised that Mud would need to come up with a way to seal in some of the panes, as a couple of the sealing strips were beginning to fail. 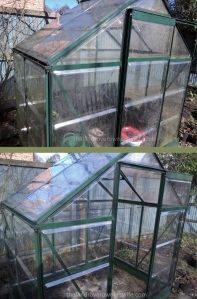 Polycarbonate greenhouses get a lot of bad press, cited for being flimsy and unreliable but I have to fight their corner here because both our greenhouse have done us proud and are still going strong. The larger of the two (8×6) was bought and erected in April 2008 and the smaller one (6×4) in May 2009, with Mud securing them to the existing concrete base with the use of heavy-duty bolts – these structures weren’t going anywhere. They have withstood all the strong winds that have plagued our country in recent years, not to mention several direct hits from a neighbours football and have only required an annual clean to rid them of algae and dirt, no different in that last respect to any other greenhouse. At 6 and 7 years old, these greenhouses have proven their worth and whilst our long-term plan has always been to replace them with glass and brick structures, for now they are doing the job and with a little bit of fettling by Mud, will no doubt continue to do the job for which they were bought until we get around to the redesign of the veg plot.

With Middle Mudlets’ help, it took less than an hour to clean the greenhouse and while its’ fair to say that it wasn’t the most thorough of deep cleans this year, it looked a lot better than it did and was more than adequate for the tomato seedlings. Having used up my energy reserves, I thanked Middle Mudlet, we tidied the cleaning stuff away and made our way back inside, leaving the greenhouse to dry in the glorious sunshine for an hour or two.

Later on I moved the seedlings into their new home and then covered them in two layers of fleece, to help them cope with the shock of temperature drop. The fleece stayed in place until Sunday morning and with the night-time low predicted to be 7, I opted to leave them uncovered Sunday night and last night. I’ll continue to keep an eye on the temperatures because there is still a very real chance of frost and they will need to be covered on those nights.

I still have the large greenhouse to clean but that can wait until another bright, warm day, hopefully during the holidays so that I can have two helpers assist with the cleaning.

One thought on “Not for public consumption”