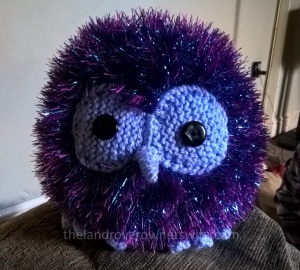 These little chaps are actually quite big

Following the completion of Middle Mudlets’ complicated sweater, I felt the need to do something a little less challenging and so opted to dig out the King Cole tinsel yarn I had purchased a few months ago and make up a couple of sparkly owls ready for the Christmas Fare. I had come across the owl pattern a short while ago, in the local garden centre of all places, and had bought both it and another couple of balls of the tinsel yarn, plus some pastel coloured double knit for faces, ears etc. Now with some time on my hands and no major project waiting in the wings, I gathered my materials together and before long I had completed a little blue owl, much to the delight of the younger Mudlets.

Actually, when I say ‘little’ owl, it was the size of a large cantaloupe melon, almost double the size of the hedgehogs I’d made earlier in the year and when I say that the Mudlets’ were delighted with it …… well they were until they realised it wasn’t for one of them and have vowed to buy themselves one each from the Christmas Fare. 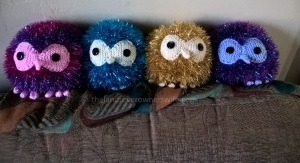 A parliament of four owls sitting watching me make number 5 – another blue one.

Anyway before long a second owl had joined the first and within the week I had a parliament of five owls sitting along the back of the sofa.

I figured that five owls was enough for now, as this will be my first time trying to sell anything I’ve made and I don’t want to end up with dozens of them taking up valuable space around the cottage. That said I also decided to make some more hedgehogs as well, as the ones I had made early this year, have been much admired and appreciated by their recipients. So by middle of the following week, an array of hedgehogs was beginning to take shape and two smaller but equally as sparkly specimens, had joined the owls on the back of the sofa. By now I had decided on my next major project and so the making of the hedgehogs has been put on hold for a few weeks. They don’t take too long to make so I should be able to complete another three well before the date I need them for. 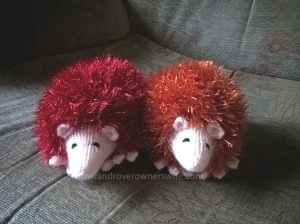 As for my next project (now my current project) it isn’t a garment for Eldest Mudlet. Those of you who follow my blog an a regular basis may well have noticed that my garment projects follow a set pattern: me, Little Mudlet, Middle Mudlet and then Eldest Mudlet. Well this year Eldest Mudlet decided that for her birthday she would like us to buy her the jodhpurs she needed for the shows she is now starting to take Prince to and for Christmas she would appreciate a contribution to the cost of her show jacket, instead of a knitted garment. As Middle Mudlets’ sweater had taken so much longer than I had expected, I was quite relieved, as I now had more time to do the toys for the fare and wouldn’t feel so rushed in the run up to Christmas. 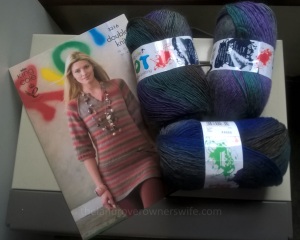 The tunic I’m making and the yarn

Of course this meant that I now needed to find a suitable pattern for myself and so trawled through the Deramores patterns pages, finding a few that I liked but I was struggling to find one that I really, really liked and wanted to make until, that is, I started to look at yarn options for a ‘possible’ choice and stumbled across a pattern that leapt out at me shouting “Make me! Make me!” In fact this was a two garment pamphlet and both designs were gorgeous and though I opted to make the shorter tunic this time around, I am seriously tempted to make the dress for myself as well, in due course. 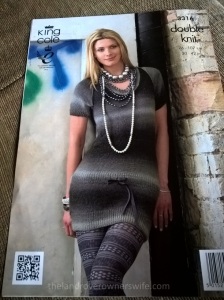 The flip side – I quite fancy making this one as well

The pattern is King Cole 3316, the yarn is King Cole Riot double knit and the shade is ‘Dude’. The yarn is 30% wool and 70% premium acrylic, comes in 100g balls which equates to approximately 324 yards or 294 metres and cost £4.59 per ball on the Deramores site. So far it is knitting up in lovely bands of colour, feels soft but the stitches do have a tendancy to split if you’re not careful.

I don’t normally like plain stocking stitch work but the bands of colour that are forming as I work add interest and I am really looking forward to getting this project finished but for all the right reasons …… I can’t wait until I am able to wear my new sweater dress.

7 thoughts on “A Parliament, an array and a dress for me”