The tunic I’m making and the yarn

Having experienced the challenge of Middle Mudlets’ pretty but complicated lace sweater, I opted for a project which uses a mostly plain stocking stitch for my next make. I found many ‘okay’ patterns whilst I was looking for a project for myself but nothing really sang out at me until, that is, I found a King Cole leaflet with a beautiful pair of patterns on it. One was a sweater dress with short sleeves and the other a tunic length dress with three quarter sleeves. I really liked both patterns but chose to make the tunic rather than the dress this time, although I do intend to make both eventually.

I don’t always use the yarn that is recommended on a leaflet but having looked at a host of potential alternatives, I decided that the recommended yarn was probably the best choice after all and so I placed an order for King Cole double knit in the shade ‘Dude’ and I have to say that I haven’t been disappointed. 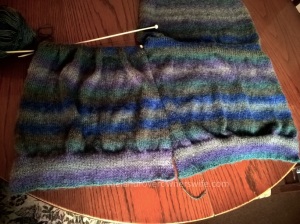 I’m thrilled with how well the colour bands are matching up.

So far I have completed the back section and am about half way up the front and the colour banding is really pretty. Luckily the yarn arrived with four starting at pretty much the same place in the colour way and the other two also matching each other which means that I have been able to start the back and front sections off in an almost identical place in the colour pattern, meaning that the banding on the front and back are a pretty good match. It also means that when I need to join a second ball on to the front which is imminent, the join pattern will appear identical to the join pattern on the back, making the overall look of the dress seem planned and not hap hazard. I also chose to use the ribbed hem edge of the dress style as opposed to the straight hem edge of the tunic because I tend to find that plain edges roll up, although the tunic edge is made by doubling over an inch of the stocking stitch, effectively creating a proper hem and so rolling up probably wouldn’t be an issue.

Overall, this is proving to be an enjoyable make and quite relaxing and I’m looking forward to trying on the finished article.