Mudville Lego City with the much loved Yellow Brick house

It’s been almost four years since Mud built a not so little yellow Lego house for the girls to play with and in spite of his repeated requests for it to be demolished so that he can rebuild a new and improved version (the perfectionist in him hasn’t ever really been 100% happy with the finished model), both of the younger Mudlets have resolutely refused, happy with the yellow creation, sharing custody – for the most part, amiably – and incorporating it into their games at will.

In the four years since the creation of the yellow house, the Mudlets have accumulated several of the Lego Expert Creator Modular buildings and together with road plates and the yellow building, they can now create a respectable little ‘City’ scape.

For a large portion of this week we’ve had Mudville Lego City set up on the lounge floor and the girls have been playing with consistently, if not always harmoniously. As I type, Little Mudlet has overall charge and city residents find themselves sharing space with her impressive collection of Lego Elves Dragons but I managed to get some shots of the city before the dragons invaded. 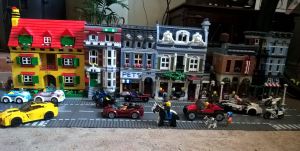 We’re big fans of Lego in this household. I often hear people complain that it’s so expensive but, as I’ve said before, in terms of play value, we’ve had more than our money back. It’s a rare day that passes without one or other of the younger Mudlets spending at least a small portion of the day playing Lego which is more than can be said for some of their other, cheaper toys and Mud and I are frequently rendered speechless by the quality of model they produce with little more than a pile of bricks and good dose of imagination.