There are a tonne of jobs that need doing out in my garden and yet I can’t seem to muster up the energy to get out there and do anything about it. I think it’s to do with the fact that all the jobs involve digging out my summer crops and leaving the beds empty, thereby signalling the end of the summer. I have made a very half hearted start but I really must get out there and do the necessary works or else I won’t be able to feed the beds or, more importantly, prepare my long bed for its’ winter inhabitants: Cabbages and cauliflowers.

In terms of feeding the beds, I’m seriously tempted to follow the ‘no dig’ method this year. As I understand it, the ‘no dig’ theory is that by not digging into your beds, the ecology that exists within them is protected, remains intact and continues to grow and thrive and I guess that makes sense when you think about it. I mean picture Mr Worm going about his business, being helpful, doing his job and then ‘WHAM’ the gardener whose soil he is so industriously enriching, slams a spade into him and it’s goodbye Mr Worm.

No, this year I think I’ll just lay a nice layer of manure on the top of the beds and let the worms do the hard work for me. But first I need to clear the beds, dig up and repot the strawberry runners and plant out my cabbage and cauliflower seedlings, although I do need Mud to make my mini polytunnels before I can do that particular job.

Meanwhile in the house, my cucumber seed saving has now had three lots of emptying and refilling and it looks like I have a few good seed for next year. As for my Little Elf chillis, three of them are through and are now living on the wood burner (which isn’t on), in the lounge. 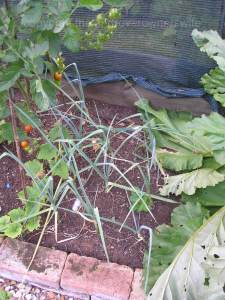 Still some life in the garden

Not that I can see them because my gorgeous bouquet of red roses and pink lilies is blocking my view of them but I think I can live with that. The flowers were a gift from the younger Mudlets and Mud and are quite significant: red roses were the first flowers Mud ever bought me and lilies are my favourite flower of all. Middle Mudlet was quite exact in the matter of choosing them, informing daddy that it was always best to pick a bouquet with buds rather than open flowers because they would last longer. It’s so nice to see that she was paying attention all those months ago when I explained this to her because I have certainly reaped the benefits with the roses now almost fully open and a lovely ring of pink lilies where just a few days ago there were green buds.

Having finally decided on a ‘Plum Chutney’ recipe, today I popped into town to purchase the ingredients I would need to produce 3.3kg (allegedly) of chutney from the 1.5kg of school plums which are currently living in our freezer. Thankfully there are still sufficient onions left from the school plot for this particular recipe and two mums have offered me the cooking apples I need, as it has been a good year for apples and they have more than enough to be able to spare the pound or so required for the recipe. I hope to have this made and bottled in the next week or so which should give it enough time to mature, ready for sale at Christmas.

Mud earned himself a ‘who asked you?’ stare when having spotted the mismatched assortment of jars I have assembled for my chutney making project, he foolishly asked if I didn’t think it would be nicer to have matching jars? Well, duh, of course it would but unfortunately:

So instead there will be an array of pre-loved jars, in all different sizes and shapes from which prospective purchasers can choose. Furthermore each lid will, I hope, be covered with a circle of festive material, tied with ribbon and the jars themselves will be adorned with a label of some sort.

With the rest of the ingredients secured, I headed home and arrived to find that I had just missed a call from the school. A few seconds later and Mrs T was telling me that Middle Mudelt had got something in her eye during PE earlier in the afternoon and, as a result, her eye was a bit sore and stingy. Was it okay for Mrs B, the first aider, to cleanse it with an eye wash solution? Absolutely, was my reply and with only 45 minutes of the school day remaining it was decided that though the eye was irritable and uncomfortable for Middle Mudlet, it wasn’t exactly life threatening and so she would return to class.

The eye was still looking pretty red when I collected the girls from school and an hour or so later, I could see that it wasn’t getting any better and was causing Middle Mudlet some considerable discomfort. Eyes are something I won’t mess about with and so concerned that possibly there was still some grit trapped behind the eye, I called the Triage nurse at our Doctors’ surgery. The nurse booked us in for an emergency appointment and a short while later Middle Mudlet and I were with one of the Doctors.

I have to say at this point, that Middle Mudlet was incredibly brave, as the Doctor examined her eye and then applied some dye to see if he could see a scratch. He also noticed that the other eye, although not the vivid red of the troublesome one, was a pale pink colour and so he examined that one as well. His conclusion was that whatever it was that had blown into Middle Mudlets eye, had caused a severe allergic reaction which was why the other eye was also showing signs of pinkness.

So poor Middle Mudlet now has to endure the application of eye drops 4 times a day for the next 3 or 4 days. She has gone to bed hoping to wake with a much less irritable eye in the morning and no idea at all as to what it was that blew into her eye and caused this reaction. I guess we’ll never know but it just goes to show how vulnerable the eyes are and how easy it is to write something off as normal, when in fact it may be anything but.