From seed to jar

Fifty percent of the inhabitants of Mudville, love pickled Gherkins, myself and Little Mudlet, and so when she spotted a packet of Gherkin seeds at the garden centre, a few months ago, and realised we could produce our own pickles, Little Mudler asked if we could grow some. END_OF_DOCUMENT_TOKEN_TO_BE_REPLACED

The Rhubarb got out of hand and took up a lot of space.

It seemed as though it would never be warm enough to start planting things out in the garden, or indeed for me to want to stir my aging, aching bones, but finally, the weather started to show some signs of warming up and over the last couple of weekends I have made a start at getting things planted.

END_OF_DOCUMENT_TOKEN_TO_BE_REPLACED 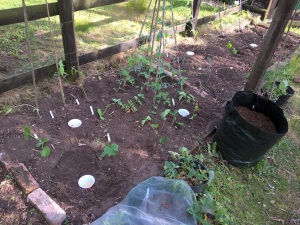 Following on from the success of her older sister last year, Little Mudlet asked if she could have a section of garden this year and so a couple of months ago, I paced out two equal areas at one end of my longest bed, marked the boundary of each with house bricks, and let the girls choose which bit they wanted.

END_OF_DOCUMENT_TOKEN_TO_BE_REPLACED 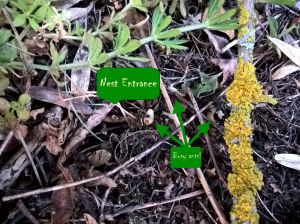 Ants are amazing creatures to watch!

It was with sinking heart that Mud realised that our lovely ornamental plants were once again under attack by Vine Weevils! The back end of last week, he had noticed that some of our beautiful plants were looking more than a little sick and, with last years carnage fresh in his mind, he literally began delving into the mystery – or rather the compost of the affected plants. END_OF_DOCUMENT_TOKEN_TO_BE_REPLACED

Ordinarily, at this time of year, I would temporarily turn the kitchen floor into a makeshift potting shed and spend a pleasant hour or so sowing more seeds into various sized seed trays and propagators. Plastic sheeting would be laid over the carpet tiles with the bag of seed compost, a large black catch-all tray in which the seed trays are placed whilst they are filled with compost, the propagators themselves, already written labels, my small watering can and last but by no means least, the seed packets, all carefully laid out on the sheeting. END_OF_DOCUMENT_TOKEN_TO_BE_REPLACED

Tomatoes in the making.

Okay, for the more pedantic of you, I’ll tell you up front that I did this item arse about face, to coin a phrase. I actually moved the seedlings into the greenhouse the day I cleaned it and only potted them on today but there was a very good, logical reason for this  change which I will explain. END_OF_DOCUMENT_TOKEN_TO_BE_REPLACED

Well worth the effort.

If I’ve said it once I’ve said it at least once a year for the last eight – I hate the annual greenhouse cleaning ritual. So, as you can see, first thing this morning my greenhouse was looking very much the worse for wear, with compost, spiders webs and general detritus liberally decorating the floor, staging and trays whilst the greenhouse panels where a very definite shade of algae green. END_OF_DOCUMENT_TOKEN_TO_BE_REPLACED 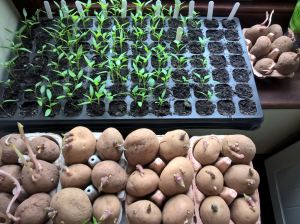 I have a list of jobs that need doing over the two week Easter Break and I have decided I’m going to list them here, ‘tick’ them off as I complete them and see how many I can motivate myself to complete. Whilst I managed to get a significant amount of clearing up done last weekend, I spent a large percentage of this week nursing an aggravated sciatic nerve but I absolutely need to get jobs done this week or we will be too far behind to catch up. END_OF_DOCUMENT_TOKEN_TO_BE_REPLACED

I am ashamed to say that first thing this morning my garden looked more than a little unkempt. Last years cabbages, carrots, parsnips, canes and netting were still in situ and a thick mat of weeds and grass had started to take over one of the ground beds. Many the time over the last few months, I have wondered up to that end of the garden to survey the damage, anxious to make a start but opting instead to return to the house and do something a little less strenuous. Today, however, the sun was shining, the air temperature was warm and I finally felt up to making a start on the garden maintenance. END_OF_DOCUMENT_TOKEN_TO_BE_REPLACED

Looking back I can see that I sowed the chilli seeds in January last year and we had already seen the first seedlings popping up by now and so it would make sense to say that in sowing the first of our seeds today, we are a tad behind. However, a more detailed study of last years growing season reminds me that whilst we had indeed sown the first chilli seeds back in mid January, once they had poked their heads above the compost, they opted not to spread out their roots very much, until the much warmer weather arrived some weeks later. In fact so slow was their growth, so reluctant were they to throw out more roots, develop more leaves and branches, that I began to wonder if the whole crop was destined to fail. Thankfully their slow start didn’t have too many repercussions later on in the season, as we had one of the best chilli harvests ever. END_OF_DOCUMENT_TOKEN_TO_BE_REPLACED