My squashes are used as part of our Halloween display

I was really rather taken aback at the size one of my Anna Swartz Hubbard Squashes reached. I’ve never grown this variety before and I have managed to grow two of them, across two different plants and, to be honest, other than the colour they look nothing like each other really which was surprising to say the least.

However, I love growing squash and pumpkins (bet you hadn’t figured that one out :D), in fact I would say that squash and pumpkins are to me what yarn is to a fellow blogger Claire. I squeeze as many as I can into whatever space there may be and try to grow two or three different winter squash varieties, plus a pumpkin each year.

The squashes are not allowed to be eaten before October 31st as they form an important part of our Halloween display in the hallway and add a certain spooky charm to proceedings I think. This picture is one of my all time favourites and you can see Winter Festivals and Cobnuts hidden in the shadows.

Oddly enough Summer squash don’t hold the same fascination but there is something about the Winter Squash and Pumpkin family that is addictive, I couldn’t tell you what it is exactly but they’re just fun to grow and delicious to eat ….. well maybe not pumpkin so much, unless you add loads and loads of flavours to it …… or put it into a pastry case with sugar, cinnamon and condensed milk, bake it and, serve it with cream. Yup, definitely much nicer like that 🙂

But back to the point of this post (and yes it does have one) and that is to record the details of the very few pumpkins/squashes I have grown this year, as I harvest them:

Girth around the widest part: 49.5cm

This morning (September 8th) during my usual check on the inhabitants of my garden, I discovered that the second of the Hubbard Squashes had detached itself from the vine and so I brought it in, did all the measurements, took a picture and here it is – as I said, it doesn’t look that much like the first one! 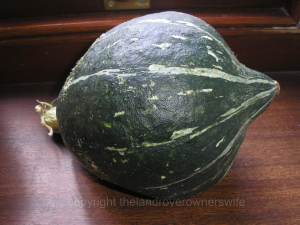 Girth around the widest part: 47cm

Yesterday, Sunday 22nd September and I had to bring the largest of the two pumpkins in, as the vine had pretty much died back. There is still a second, smaller pumpkin on another plant but neither could be considered record breakers and we will probably supplement these with a larger, shop bought pumpkin when it comes to Halloween lanterns. 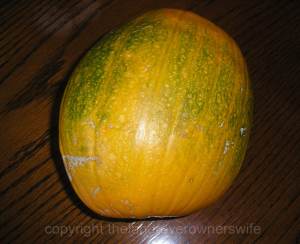 Girth around the widest part: 44cm