These seedlings are 2 days old 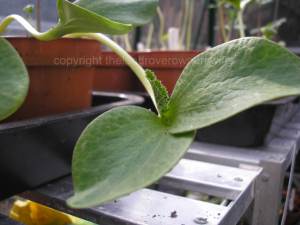 At just shy of 3 weeks, these seedlings are starting to put on some serious growth and it won’t be long before they take over the greenhouse. It’s a few weeks yet before I will chance planting them out.

You can see the next set of leaves starting to develop and I have already planted out two of my Hubbards. I partially back fill the hole I’m about to plant my Squash plants into, using compost from our own compost bins. I then water the hole thoroughly before carefully placing the plant into its’ new home and firming it into place. These plants are now 6 weeks old.

The last of the seedlings has now been planted out, at 7 weeks.

Now 2 months old and the flower buds are beginning to form. These look to be male flowers as there is no sign of a swollen base to the flowers: 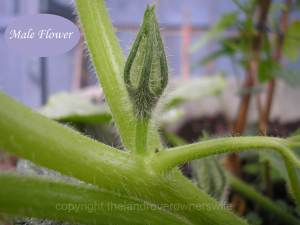 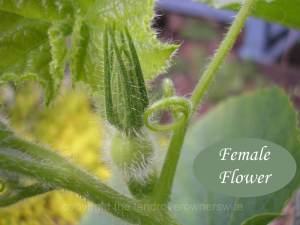 This morning (25th June) the female flower was open but sadly there were no male squash flowers open for pollination to take place. Next time maybe. 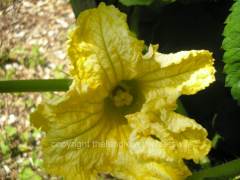 At three months old the Anna Swartz Hubbard Squash are growing nicely and have plenty of flowers on their vines.

Eureka! Today I had a male flower (pictured below) and a female flower open on two different plants ……

……. and so I grabbed my fine paintbrush, dipped it into the male flower to capture some of the pollen, before painting the stigma in the female flower. Yes, there was plenty of bees around but we love squash in our household and I just like to try and make sure pollination occurs.

8 days later and the first of the fruits is swelling nicely (2 days after pollination). 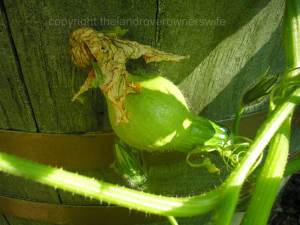 This squash has continued to swell at a spectacular rate and at 10 days after pollination looks like this. I have started a separate post to document the growth of individual squash and pumpkins which can be found here.

I have noticed with the squash which are growing on the ground, that on the stem behind the fruit there are roots growing. I think that this is to aid the growing fruit with water and food supply but I have never seen this on any other squash or pumpkin I have grown. Another grower has also said that she has noticed the same thing.

Root from the stem behind a swelling fruit.

I won’t be updating this post now until it is time to pick the squash which should be in October, before the first frosts and I will be watching the weather forecasts avidly from mid September onwards, to avoid being caught out by early frosts.

Well here it is! Slightly earlier than expected (5th September) I have brought the squash in because it decided to separate itself from the vine and it is rather large and heavy, weighing in at just over 3lb 14.2oz or 1762g, with a length of 27cm and a girth at its’ widest point of 49.5cm!