…… in my plans for my Brassica and lettuce bed which I’ve planted up this morning. I took the last of the baby broadbeans off and then composted the plants. The beans had been sown as a green manure and had never been intended to be a serious crop but with the very late arrival of Spring, if it ever did arrive as I personally feel we skipped straight into Summer from Winter, the beans were produced much later than I had anticipated but then everything else was way behind where it should have been, so that wasn’t really an issue.

Today, however, the beans had to make way for my only surviving cabbages (2 of them), 10 or so Kohl Rabi, 6 Lollo Rosso Lettuces and 3 Chicory (or Endive). 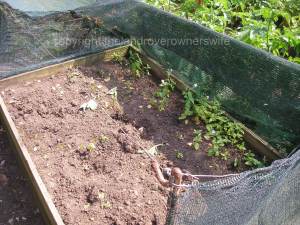 In need of weeding

Mud believes that Brassicas are a waste of time for us, due to the amount of space they take up and the need for extreme protection from insects but I love cabbage, sprouts, broccoli, kale and cauliflower and would dearly like to grow at least some of them in our patch. Obviously we grow Kohl Rabi which are also part of that family but we tend to have these in the largest plant pots we have, in the greenhouse, away from the attentions of the pigeons and the Cabbage White Butterflies.

Last year, the Gardening Club grew a really nice, relatively compact looking cabbage called ‘Greyhound’ and I decided that this year we would do the same. The issue of space did raise its’ ugly head but as Mud had very thoughtfully provided me with two beautifully painted half tubs to use as planters, I was suddenly able to move other things (the courgettes actually) into a bed in which I had planned to grow my climbing beans.

Cabbage, Kohl Rabi, Lettuce and Chicory (they’re in there somewhere … I promise)

With that decided I impatiently waited for the broad beans to finish. Unlike Mud, I’m not that keen on mature broad beans but I don’t mind baby beans mixed in with rice or a curry and so, much to his annoyance, I kept picking the pods with succulent baby beans in them, podding these into food bag and popping them into the freezer. The plants haven’t produce vast quantities but there’s enough for a couple of handfuls and, anyway, my raised bed is now free for my Brassicas.

Half an hour later and my seedlings were finally planted out and then I needed to address the next and most important issue – how to keep the caterpillars off my vegetables. 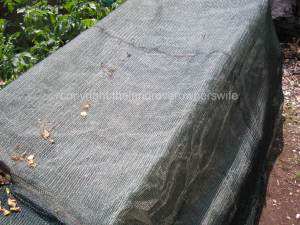 We already have a green netting (greenhouse shading is its’ official name) which we use on the raised beds, moving it along inline with the crop rotation, ensuring that the root vegetables are kept safe from carrot root fly but the size of the mesh is not small enough to prevent the Cabbage Whites landing and laying their eggs (ask me how I know). However, in a corner of the greenhouse I had a piece of enviromesh which we had bought a couple of years ago but which Mud doesn’t like due to its’ very pale colour.

It does stand out like a sore thumb against the green and brown of netting and raised beds but needs must and I needed to protect my precious seedlings. But I had a plan. If I put the enviromesh in place under the existing netting, I’d get the level of protection I needed but the dark green netting would hide it from view.

So that is what I did and with the back and bed end side of the enviromesh stapled to the wooden boards of the bed, plant rings fastening the top to the wire that the dark green netting is draped over and the original netting covering the whole thing, my cabbages, Kohl Rabi and lettuces are now snug and safe (I hope) in their bed.

5 thoughts on “Caterpillars are not included …….”