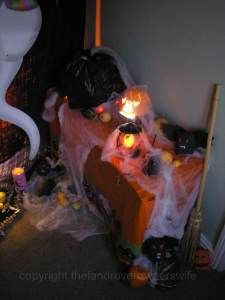 A haunted house according to Middle Mudlet

Yesterday was a busy day with a house to prepare for Halloween callers, pumpkins to carve and then Trick or Treating with the Mudlets and one of their friends.

Thinking ahead, I had already removed the seeds and stringy bits from the pumpkins the night before and yesterday morning I had washed, dried, oiled, seasoned and then roasted the huge mound of seeds that we had been left with. Each Mudlet had a bag of them added to their pack-ups instead of crisps and Little Mudlet wasn’t over keen, although she did eat quite a few, but Middle Mudlet really enjoyed them, commenting that they tasted like popcorn.

With the Mudlets’ safely installed at school (our half term was last week) I was able to set to and start decorating the hallway, as soon as I got back. We don’t go mad with Halloween decorations but the hall is always the centre piece, made to resemble as closely as I can a spooky cave/cellar/haunted house (delete as applicable).

Finally, all that was left to do was the pumpkin carving and with the Mudlets not yet having even designed their pumpkin faces yet, I was at a bit of a loose end.

“You need to do your pumpkin,” I told Mud.

“I haven’t the time at the moment,” he said. 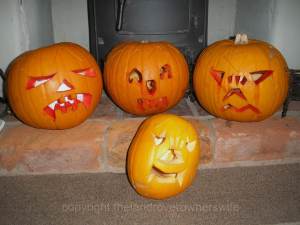 Pumpkin Family 2013:
Daddy Pumpkin, Middle Pumpkin and Little Pumpkin (with the red tears) and Mummy Pumpkin in the front.

“All you have to do is draw the face and I’ll carve it!” Having already carved my own small, home grown pumpkin, I wanted Muds’ done and out of the way so that I only had the girls’ ones to do when they came home.

Traditionally, carving the faces on the family pumpkins falls to Mud but this year, with the Mudlets at school, there simply wouldn’t be enough time for him to carve their pumpkins with them before the first Trick or Treaters arrived.

Mud popped in from his home office and contemplated his pumpkin before drawing the facial features he wanted it to have! I picked up my carving tool and approached the pumpkin:

“You’ll need to carve it at an angle,” he said.

“Yes, and it needs to slope from back to front!” ever helpful Mud added.

Patiently I waited and then the inevitable happened:

“Here, let me do it!” and the tools were removed from my hands and Mud carved his pumpkin, painted the carved features with red food gel and announced that it was perfect! That’s what I love about Mud – his modesty!

It’s the same when he cooks a dinner. It’s usually better than anything I can do and much nicer than shop bought – I know these to be facts because he likes to announce them at regular intervals throughout the meal. Yes dear!

As his pumpkin was to go on the lounge window sill, I took it straight out, draped it with ‘cob webs’ and plastic spiders and then stood back to admire my handiwork. With the inflatable vampire bat suspended above the front door, from Little Mudlets room window (I used invisible thread) and the glow in the dark bats on the door glass, all that was needed were the Mudlets lanterns, night time and we were good to go.

Normally it is the inordinate amount of time the girls take to perfect their design of pumpkin face that drives Mud to despair, as they change noses, eye shapes and teeth whilst he  tries to draw the face requested. This year, both girls drew their designs on some scrap paper, taking just a matter of seconds to decide what they wanted and happily watched me transfer, as best I could, their thoughts onto the pumpkin faces. Neither asked for any changes and so the carving of the pumpkins was completed in under 15 minutes which, to be honest, is a new record for our house. With more of the red food gel applied to their lantern faces and the hanging basket chains securely fastened in place, it only remained for one of the LED flasher unit to be placed in each and they were ready to be hung from the hanging basket brackets, either side of the lounge window.

See …. we told you it was haunted

My little pumpkin was in the hall, as part of the ‘haunted house’ and LED candles, flicker-lights, Middle Mudlets old plastic Halloween Lantern, cobwebs, plastic rats and a huge cardboard ghost, not forgetting the homegrown squashes, were all arranged to best effect with the ‘cauldron’ of treats taking pride of place. Overall I was pleased with the finished look of the Hallway this year.

Another tradition in our house at Halloween, it would appear, is the constant sound of the Mudlets asking when the first callers would arrive … and then the next ….. and then the next ….. before worry over the speed at which the treats are disappearing takes over and the question becomes a worried “Will there be any more?” Don’t be fooled into thinking their concern is over the possibility of friends turning up and there being no treats left: no, self-interest is the only driving force in respect of their concerns.

This year we had arranged for one of their friends to call for them at 6.45pm and then I would take the three of them trick or treating, finishing at the friends house, where the girls were anticipating a show and a half, as the friends mum is an American and nobody does Halloween like an American. In the event, the mum (who happens to be a good friend) came too and brought with her a little wheeled garden trolley in case little legs got too tired and her husband had put two travel mugs of coffee in amongst the cushions and blankets, so that we could keep warm on our journey. 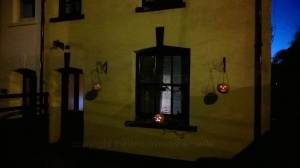 Mud had his Victor Meldrew head on him, although he’d had a busy day and was having to get up at silly ‘o’ clock this morning, so needed a reasonably early night, and wasn’t impressed with the thought that he would have to answer the door to any callers whilst we were out.

“I wouldn’t worry,” I said, “It looks like there aren’t many about this year – we’ve only had 12 so far and we’ve normally had loads by now.”

“Grunt!” was his response.

By the time we eventually got back home, both the Mudlets were shattered but delighted with the fullness of their treat buckets. I brought the pumpkins in to signal that our door was now closed and cheerfully asked Mud how he’s got on:

“The door never stopped!” he said glaring at me, “One caller every 5 minutes up until about 20 minutes ago!”

Oops! Oh dear! Never mind, it’s all over for another twelve months and next year it will fall on a Friday night so, with any luck, we’ll be able to persuade Eldest Mudlet to come over and take her sisters out …. and that isn’t a hint, daughter dearest, it’s a booked diary date and with a whole years notice – you have no excuse 🙂