The view back up the river from the Mill race bridge.

With Muds’ week off drawing to a close and yet more rain, wind and generally unsettled weather predicted for the weekend (well it is a Bank Holiday), Thursday night he announced that we ought to find an indoor attraction to visit with the girls on Friday.

“After all,” he said thoroughly disgruntled, “I’m not going to get much done tomorrow if it’s raining …. again!”

Poor Mud really has been blighted by the weather during the last couple of years, with his booked annual leave almost invariably coinciding with pretty dire weather, resulting in planned Land Rover refurbishment/restoration jobs having to be postponed, and this week had been no exception. His intention had been to paint Bonnies panels and drag Ciggy onto the front drive in order to have better access for fitting the brake lines. Unfortunately, frequent rain showers and gusty winds had hampered these plans, although some painting has happened, as can be seen on Muds blog here.

So with more bad weather forecast, Mud threw in the towel and the search began for a place to visit – preferably indoors. Half an hour later and we had stumble upon the Lincolnshire Road Transport Museum which is based in Lincoln iteslf, on an industrial estate. Admission was free for the under 16s and only £3 per adult, so we decided that coupled with the traveling distance of around 1 hour, this would be a good place to go. 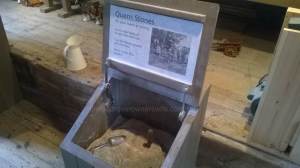 A very heavy yet small millstone for interactive hand grinding.

According to the website, the museum closed at 4pm, so Mud decided that we would go first thing Friday, have a look at the exhibits, go find somewhere for lunch and then head back, in time to collect more paint from the local suppliers so that once we got back home, any breaks in the weather could be fully utilised.

As luck would have it, Friday morning dawned bright and dry with no immediate sign of impending downpours. Mutterings of ‘I don’t believe it’ could be heard, as we prepared to set off on our outing. With the sun blazing down, we headed towards Lincoln and arrrived at the museum in good time, in spite of road closures, diversions and heavy traffic. Unfortunately, as we pulled onto the site, it was glaringly obvious that it wasn’t open yet. As it was now 10.30am, we were ever so slightly perplexed and so I jumped out and checked the opening times. 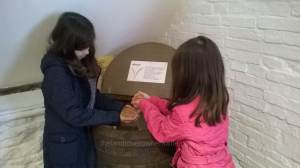 Visitors are able to handle four different types of grain

Bearing in mind that the forecast rain still hadn’t put in an appearance and so poor Mud was already feeling a tad put out due to the lost painting opportunity, my announcement of the fact that the museum didn’t in fact open until midday, was met with stunned disbelieve and an unrepeatable utterance which amply summed up Muds’ opinion of the British weather, the late opening time and life in general.

A quick discussion ensued during which we agreed that it was too early for lunch, too late for breakfast and too far to come, just to turn around and head back home again. Mud switched on his phone and Googled available attractions in the area. A few minutes later and he had pin pointed another place of interest just 20 miles away and suggested we head that way and come back to the Transport Museum a little later on.

It’s amazing the little gems you can find when plans go awry and new plans have to be hastily drawn up.

The huge wooden waterwheel was actually inside the mill building

Half an hour later and we drove into the car park of Cogglesford Watermill. We admired the view of the river that feeds the Mill race, counted the ducks, tried to spot the tiny young fish which were hiding in the shallows, oohed and aahed at the huge fish that swam into view in what was beautifully clear water and then walked over to the mill building, only to discover it wasn’t open yet!!!

I spotted a sign on the door which proclaimed the opening hours and trying hard to keep a straight face and in a voice devoid of all expression, I announced “It doesn’t open until midday!”

Thankfully for Muds health and well being, not to mention the two parent status of our household, there was a lovely little cafe next door, the Cogglesford Mill Cottage, which was open and so we decided to retire into its’ depths, have a calming drink and as it was now 11.15, maybe a bite of lunch. As with the Muddy Boots cafe the other week, this cafe was a charming and delightful place, with friendly staff. We opted to sit in the cosy little lounge, as it was a little chilly outside. The lounge was tiny with two, two person tables and so the Mudlets got to sit at a table all by themselves for their meal which they thoroughly enjoyed as it made them feel quite grown up. The food was lovely and reasonably priced and the service was fast and friendly. 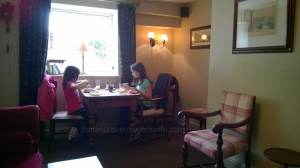 So grown up: a table for two

By the time we had eaten our lunch the Mill itself had opened and we were able to go and have a look around. Admission to the Mill is free, always a bonus, and we spent an enjoyable half hour or so, looking around and the Mudlets even got to have a go at turning a mill stone (albeit small ones) to grind some wheat. The Waterwheel itself wasn’t in operation yesterday but they do have set days when it is and details can be found on the website, along with other events.

Before we left the Mill we visited the gift shop and I bought 500g of the Organic Wholemeal flour that the Mill produces. A bread recipe card to go with the flour was freely available and so when the Rayburn is turned back on in a couple of months, I will use my flour and the recipe and then do a post hopefully on how tasty it is. The girls also came away with a small, good quality gift each which didn’t cost the earth and they also bought a discovery trail pack.

The impressive mechanism turned by the wheel.

The discovery trail runs between the Mill and another site called the heritage House and packs are available for the cost of £1.50 each and include: a question leaflet for things to spot en route between the two buildings, a pencil to write the answers in with/do wall rubbings etc and a packet of four crayons. Once completed, the answer sheet can be handed over to either the Miller or, I’m assuming, a member of staff at the Heritage House, for a small prize and these appeared to be items of childrens stationary. Unfortunately due to our parking ticket fast approaching its’ limit (free for first 2 hours and then £3 for next 2 hours) and the need to get back to the Transport Museum, the girls only had time to complete half the trail. We will, however, go back another day so that they can complete it.

All in all we enjoyed our last minute trip over to the Mill and felt it was well worth the effort and time and will happily return but maybe on a day when the Watermill is running because that must be a sight to see and a sound to hear.

Next stop the Transport Museum …….