Little Mudlet was dwarfed by a waterwheel.

The Mudlets were playing quietly and peacefully on the rug and I was watching something on the television, when Mud, who had been engrossed in his most recent copy of ‘Classic Land Rover’, with an air of assumed casualness, suddenly announced to no one in particular “Oh look, it’s Leafers at the Pit this weekend!”

I waited and sure enough, a few minutes later he suggested that this year, perhaps we could pop across (it’s an hour away) and have a gander. Mindful of the fact that, much as we love them, the idea of spending hours walking around looking at other peoples Land Rovers and chatting about axles, gearboxes, engine conversions or leaky gaskets may not be to every ones taste, he sweetened the deal with an even more casual, “Oh and whilst we’re over there, and seeings how the event is held at the National Coal Mining museum, we could spend some time looking around the museum as well.” 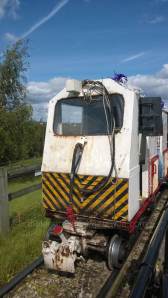 The train was the highlight of Middle Mudlets’ day

So that is how it came to be that early yesterday morning (Sunday), we found ourselves heading towards Wakefield, with Mud bemoaning the fact that despite owning three Series Land Rovers, not one of them was up to the journey either mechanically or in terms of passenger capacity and we were therefore having to travel in our Japanese pickup instead. Leafers at the Pit is a Land Rover show with a difference, as it is open only to Leaf Sprung Land Rovers and not coil sprung Defenders etc and Mud has covered the actual Land Rover part of this trip in this post on his blog.

Suffice to say, for what was a relatively small show, the atmosphere was extremely friendly and welcoming, with Land Rover owners happy to talk about their vehicles, offer advice and discuss all aspects of rebuilds, restorations, refurbishments and general maintenance. Mud was in his element but after a couple of hours, the Mudlets were getting pretty fed up and were constantly asking when he was going to deliver on his promise of pit ponies and gift shops! 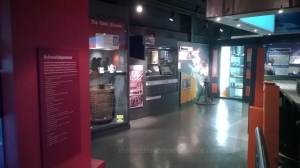 One of the exhibition halls

Mind you, both girls enjoyed the 5 minute ride in the battery operated train to and from the Land Rover display area, not least because the train they were riding in was one that used to operate down the pit, taking the men to the pit face. Mud had a fascinating discussion with the driver about the mechanics of the train and was thrilled to discover that the its’ gearbox was actually a Land Rover one.

The museum itself is split into several sections and there is the opportunity to go down in to one of the mines. Middle Mudlet was very keen to experience this particular treat but as Mud doesn’t like heights, I don’t like heights or dark, enclosed spaces and Little Mudlet still hadn’t forgotten how much she had disliked going down the Blue John Caverns last summer, we opted to give the underground tour a miss. However, in a moment of rashness I suspect he may live to regret, Mud promised to take middle Mudlet down next year, when we return for the next Leafers at Pit event (hopefully in one if not two of our own Land Rovers). This gives him a year to get used to the idea because our intrepid middle daughter will not forget.

I would like to point out at this juncture, that I have made no such promise and give fair warning that I will be remaining above ground with Little Mudlet.

The cabinet of safety lanterns was a favourite of mine

Admission to the museum was free but the train ride was £1 each for one way or £1.50 each return. The underground tour was £3 each for which you received a metal ‘check’ which is the traditional method used to register the number of people working down in the mine at any given time. At the end of the tour you can either keep the check as a souvenir or hand it back for a refund of your £3. There is also a cafe which we had popped into when we arrived but found that just over £11 for 1 tea, 1 coffee, 2 cartons of fruit juice and 4 pieces of cake/slice was a little on the steep side.

The exhibitions themselves are pretty impressive and there are a lot of interactive aspects, with a host of buttons and levers to pull which the Mudlets enjoyed immensely. There is also a lot of mining paraphernalia on display, including a favourite of mine which was a huge glass fronted cabinet containing dozens of safety lights and lanterns. Short films and narratives can be seen and heard through out the museum.

In the first exhibition hall, we were charmed by the mining cottage back yard scene which had been set up and included such detail as a bottle of milk, tin bath and outside toilet. There was even a rabbit hutch which had been cleverly constructed around some sort of television screen or monitor, upon which footage of a rabbit moving about was played which gave the whole scene a touch more reality.

The interactive coal face exhibit was a big hit. Just inside the entrance was a tunnel which was actually a reproduction of a typical roadway along which the miners would crawl. It didn’t go a great distance, taking only seconds to get from one side to the other but with its’ twists and turns the roadway was pretty dark and it was Little Mudlet who got up the courage to make the first passage through. Not to be outdone by her younger sister, a hesitant Middle Mudlet (the person who wanted to go down the mine if you recall) soon followed. Mud and I were too big to go through the tunnel, a fact which caused us great sorrow and disappointment ….. not.

By far the biggest plus, certainly for Little Mudlet, was the stable area complete with two ponies and an 18 hands high, Clydesdale horse. The stable girl took the time and trouble to explain about the life of a pit pony and to our amazement told us that it wasn’t just the smaller ponies that were used down the pit. We certainly came away with a greater respect for the animals who, for the most part, lived their lives underground and for the men who looked after them.

We ended our day in the gift shop where there was a large range of items to chose from, including a nice selection of models made from coal and Little Mudlet decided on a pit pony coal figure as her memento of the visit, whilst Middle Mudlet settled on a thin but beautiful slice of dark blue agate and a large rock of rose quartz, both of which have now been added to her growing collection of such treasures.

Setting off for home, the Mudlets nattered about all they had seen …. until that is Little Mudlet, exhausted by a few very busy days, dozed off and Mud and i reflected on another day well spent and yet more memories for our girls to cherish.