I love the sight of the chives in flower.

With Mud busy painting the kitchen and Middle Mudlet out at a friends birthday bowling party, Little Mudlet and I decided to make the most of the lovely weather on Sunday and ventured out into the garden where we set about weeding and seeding the various beds. After their session weeding the other week, Little Mudlet was stunned to see just how many weeds had sprung up but she set to with her little hand trowel and hand fork and was soon clearing all of the greenery out of one of the supposedly empty beds, whilst I harvest around 2lb of rhubarb, half of which I froze and the half I used to make a crumble for dinner. 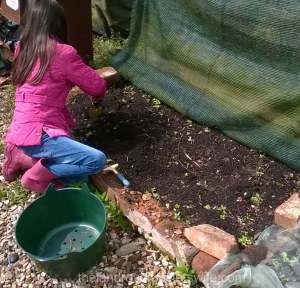 “Look mummy, a potato!” she said a short while later and I looked over and sure enough she had uprooted a plum sized little tuber, obviously missed in what had been, I thought, my rigorous clearing of last years’ potato beds.

“It’s what’s known as a volunteer,” I explained before continuing with, “It’ll have been the tiniest of potatoes, possibly no bigger than a pea, when I harvested them last year, has fallen of the plant and has been missed because of its’ size. Now of course it has grown and sent up its own shoot!”

The carrots were over run with weeds.

I carefully removed these. Once I had finished weeding the carrot bed, it was clear to see that some of the seeds in one row had either not germinated or had been munched on by the fiendish slugs. Other carrot seedlings were also showing signs of slug damage – action needed to be taken! As the carrots are under netting, any slugs or snails are inaccessible to birds and hedgehogs, both of which generally do a decent job of controlling the slug population in my garden. I tend to use beer traps to control the slugs in open locations but as the carrots are protected by the netting, I decided to put a light scattering of slug pellets down amongst their neat little rows before securing the netting into place again, safe in the knowledge that the friendly wildlife can’t reached the affected slugs. 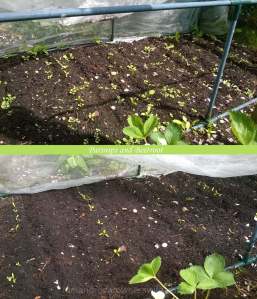 You could hardly see the parsnips and beetroot.

Slowly but surely we spent an hour weeding our way through the first of the beds and I have to say that my little helper didn’t complain once about the tedium of the job. As a reward for her hard work, she had the pleasure of sowing two rows of lettuce between the  last two rows of parsnips, whilst I sowed more beetroots to fill in the gaps in the rows which were between the first 3 rows of parsnips. As with the carrots, this bed is covered by netting and therefore bird/hedgehog proof and so I sprinkled some slug pellets around the rows, before fastening the netting tightly back into place.

Little Mudlet cleared the long bed as best she could.

With around half the beds done, we broke for lunch and I could see that my youngest was flagging somewhat. She had certainly earned her lunch and the rare treat of a whole tin of ice cold cola for herself. After lunch, she decided that she had had enough and stayed inside whilst I went back out and continued pulling out the seemingly endless weeds but the call of the garden proved too much for Little Mudlet and a half hour later she pulled on her wellies, donned her gardening gloves and rejoined me in the vegetable patch. 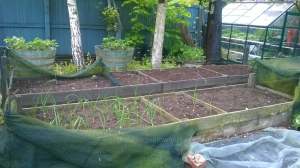 The onions are growing nicely and the potatoes are through.

We worked on for another hour with Little Mudlet chattering away, as she cleared the longest bed of unwanted greenery. Another two rows of carrot seeds and one more of beetroot went into one of the freshly weeded covered raised beds and then I moved onto the two large half barrels. The first of these was relatively easy to tidy up, as it was only harbouring more of the annoying tree seedlings (which have germinated in their thousands around my garden) amongst the strawberry plants. I have to say that the strawberry plants in the half barrels, are looking extremely healthy and are laden with flowers. In fact, now that I come to think of it, ALL the strawberry plants are looking pretty good and there are masses and masses of white flowers promising, with a little luck, a bumper crop of berries this year. 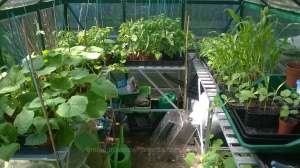 The large greenhouse is full to bursting.

Sadly, the same could not be said of the second half barrel. Oh the strawberries were looking as healthy and vibrant as those in the neighbouring container but then so were the nettles! You could hardly see the strawberry plants for the mass of nettles that were growing amongst them. Obviously weed killer was not an option and so there was only really one thing for it – I would have to pull them out, one by one. It took me close on half an hour and my fingers felt like they were on fire by the time I had finished but I got every single one of the nettles out and found more volunteer potato shoots, not to mention more of the tree seedlings buried amidst them. Thankfully, in spite of only wearing a t-shirt and therefore exposing my arms to the danger of nettle sting, I escaped without any further injury than stung (through thick gardening gloves) fingers. 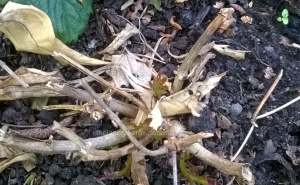 Making my way back to the large greenhouse to put the tools away and check on the watering needs of the occupants, I noticed my poor Jasmine plant which I had bought last year and planted outside – and what a sorry sight it was. The vines had died right back to straw colour and it looked to all intents and purposes to be beyond the point of no return. So as I had my secateurs to hand, I opted to chop the old vines back, resolving to pot some other flowers amongst the strawberries which also inhabit the planter. Then, to my delight, I spotted new growth at the base of the Jasmine. Closer inspection showed that the plant had indeed made it through the winter months and had started to regrow and offered the promise of more flowers and the heady scent of Jasmine, at some point in the future.

With all the beds now weed free, Little Mudlet and I stood back and surveyed the results of our labours and satisfied that we had cleared most of the weeds from the beds, we headed in doors, so that I could start dinner and Little Mudlet could pop the £1 I had given her by way of a thank you, into her money box.

12 thoughts on “Getting nettled”